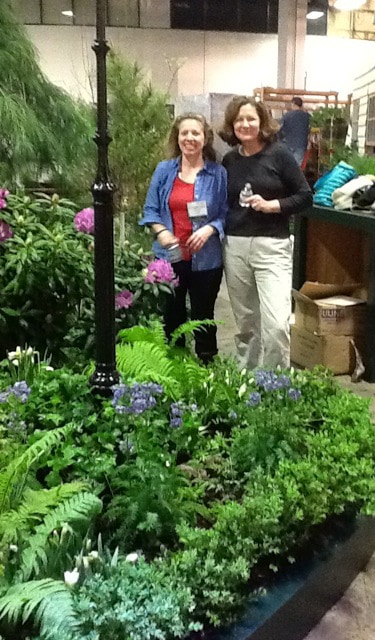 JMMDS Senior Landscape Architect Jana Bryan and Principal Julie Moir Messervy enjoyed getting their hands dirty as they put together their part of Massachusetts Horticultural Society‘s award-winning exhibit, “Sowing the Seeds of Change” at the 2013 Boston Flower and Garden Show that ran from March 13th through 17th at the Seaport World Trade Center. The exhibit highlighted the Society’s 184-year legacy leading the charge to bring the fruits of horticulture into the lives of ordinary citizens.  JMMDS’s part of the exhibit focused on Mount Auburn Cemetery, founded by Mass Hort in 1831 to address the need for alternate burial grounds in the Boston area, introducing the “garden cemetery” as beautiful landscaped resting places.

Julie and Jana designed the exhibit so that a beautiful weeping white pine tree formed its background with several handsome rhododendrons in front to set off the central focal point–a handsome iron cemetery path sign inscribed with the word, “Bigelow Ave.” to commemorate Mount Auburn’s earliest designer. Thanks to President Dave Barnett, Director of Preservation and Facilities Gus Fraser, and Chief of Conservation, David Gallagher for helping find just the right focal point. 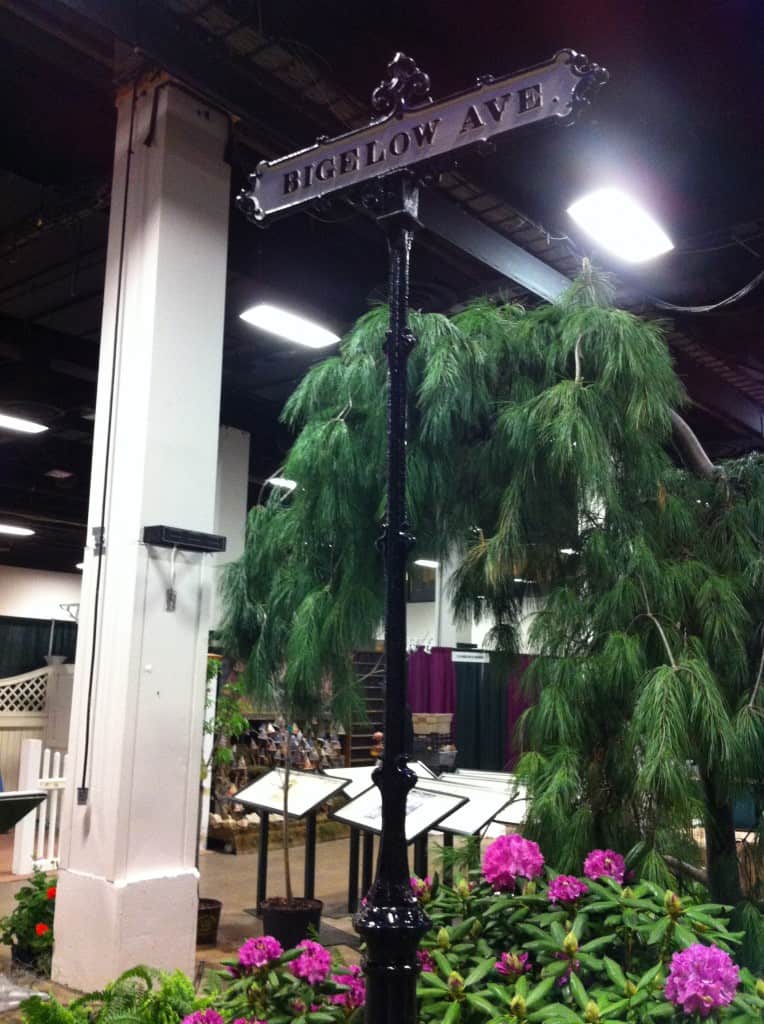 The “Bigelow Ave.” sign that formed the focal point of the exhibit.

The designers were able to create the exhibit using a broad variety of plant material amassed by Mass Hort staff.  They hedged the little corner exhibit with boxwood and then layered in ostrich fern, blue flowering Jacob’s ladder, geranium, ivy, and a collection of miniature ferns. Daffodils peeked through the groundcovers, providing subtle color throughout.  Thanks go to Mass Hort’s Executive Director Katharine MacDonald, Gardens Curator David Fiske and Director of Operations Clark Bryan, and Charlie Harris, all of whom worked so hard to make this exhibit possible.

Plants We Love: Some Excellent Shrubs

Plants We Love: Some Excellent Shrubs