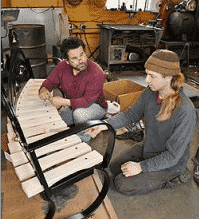 We’ve recently had the pleasure of making the acquaintance of Garry Jones, a Brattleboro “musical sculptor.” Garry and blacksmith/artist Erik Newquist have designed a musical park bench which captured our imaginations. 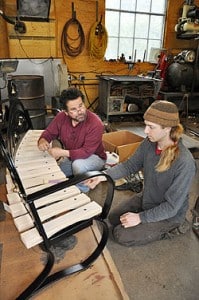 Garry describes the benches, which he and Erik hope will soon be placed in Brattleboro parks and other public spaces: “The bench frame, legs and striker mechanisms are constructed from hand-forged steel, the ‘keys’ are Vermont white cedar, and the inserts are western red cedar. It has been designed to withstand outdoor Vermont weather and to be as vandal-resistant as possible. It does not need separate beaters to be played. It is also nice to just sit quietly on, of course!”

This musical bench, entitled “Steel, Wood, Melody,” is designed for private gardens. Another version, intended for public parks, can be played without beaters and is designed to be weather- and vandal-resistant. Photo: The Harmonic Forge.

In this Studio Two video, a young girl wanders over to watch their impromptu performance and asks to join in–exactly the reaction Garry hopes for when people see the benches. “We try to make them attractive and intriguing as a way to encourage people to unexpectedly come together to play music and interact in fun ways.”

The Windham Orchestra will be performing with Garry and Erik’s benches at Brattleboro’s Latchis Theater on Thursday, March 22nd, in a sold-out workshop and performance with Dummerston school students, some of the town’s homeless folk, and audience participation. The benches will also be part of the orchestra’s concert at the Latchis on Sunday, March 25th.

Garry has been working with Hugh Keelan, the orchestra’s director, on a summer program of orchestra performances in parks, using the benches as a focus and collaborating with youth groups, disability organizations, NECCA, dance schools, other community groups, and the public. Garry is composing a “Concertino for Strings and Park Bench” and is also planning an event on the anniversary of the Irene floods with a performance of Benjamin Britten’s Noye’s Fludde (Noah’s Flood).

Garry hopes that these events will generate interest in his benches and support for placing them in public parks. Want to sponsor a musical bench for your local park? Learn more at The Harmonic Forge.

Garry is an Australian-born musician and composer who lived for ten years in Ireland, where he became fascinated with Irish mythology and began to incorporate it into his compositions.

Garry wrote his  “Fire Eye Suite” while living in Ireland. Here you can see and hear him play the Brigit movement, written to celebrate the sovereign goddess of Leinster province in the east of Ireland, performed with Laura MacKenzie, and here he and Laura play the movement for Aine, the goddess of Munster in the south. 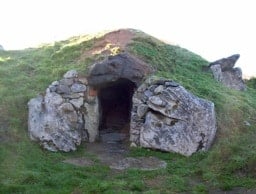 This intriguing cave is the entrance to the Temple of the Wind, which Garry Jones built for Brigit’s Garden in Killannin, Ireland. The megalithic chamber has a corbeled roof and four “wind catchers” that channel the wind into organ pipes that resonate inside the central chamber.  As the wind changes direction, it plays different notes. Photo: The Harmonic Forge.