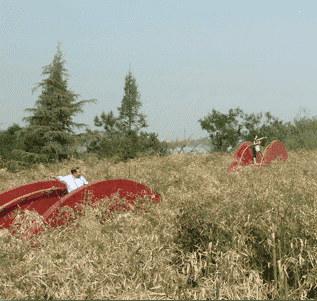 A few weeks ago, I was honored to speak at Longwood Gardens’ Leadership in Landscapes symposium, along with the Dutch international landscape architecture firm West 8’s spellbinding principal, Adriaan Geuze. Adriaan is heading up the master planning team for Longwood Gardens, so it was a delight to hear him speak of his firm’s many projects around the world and then to reveal a bit about plans for Longwood.

The lovely and haunting Swamp Garden, an installation designed by West 8 for the 1997 Spoleto Art Festival in Charleston, SC. Photo: West 8.

And what wonderful work he does! Adriaan started by speaking about his first American project, the Swamp Garden in Charleston, SC, for the Spoleto Art Festival. This garden room formed a boardwalk over swamp waters, surrounded by screens of steel wires dripping with Spanish moss. The simple idea, perfectly executed, seems inevitable when Adriaan describes his thought process.

The wooden structure shown here is the Sund Garden in Malmö, Sweden, a garden enclosed within a wall of randomly-placed and connected tree trunks. Photo: West 8.

He moved next to describe the Sund Garden in Malmö, Sweden. As described on West 8’s website, it’s a “garden in its pure sense: small, enclosed, non-functional and formed on illusions.” Stacked piles of tree trunks look like they might in the forest, waiting to be transported to a mill. Atop the stack, which visitors can climb through, lies—unexpectedly—a garden of oyster shells.

The Garden of 10,000 Bridges in Xi’an, China, is an undulating, labyrinthine representation of the path of a human lifetime. Photo: West 8.

Moving on to China, Adriaan described my favorite project of the day, the Garden of the 10,000 Bridges. It tells the story of human life, continuous and winding, like a labyrinth. The bridges rise above a sea of bamboo. How very beautiful it is!

The Miami SoundScape Lincoln Park, an intimate green park in the midst of bustling Miami Beach, offers a range of recreational and cultural activities that belies its small size. Photo: West 8.

Adriaan spoke in depth about working in Florida on the Miami SoundScape Lincoln Park. Using a hardy, hurricane-proof palm tree as the major planting throughout this 1-hectare site, his team created undulating topography with meandering pathways, all criss-crossed graphically by stark white concrete pathways and seat walls. Like our Toronto Music Garden, this New World Symphony garden “marries music, design and experience.” I can’t wait to visit it on my next trip to Florida.

I had the pleasure of getting to know Adriaan and West 8’s New York principal Jamie Maslyn Larson at a dinner given by Longwood Director Paul Redman the night before our talks. I am eager to continue our wide-ranging discussion, including imagining together what a “Woman’s Garden” might look like. I hope to visit their Governor’s Island project when I’m in New York in a couple weeks. It is exciting to be so inspired by another designer’s work, and everyone in the audience was mesmerized by Adriaan’s brilliant and humorous talk about his creative thought process and West 8’s remarkable projects.