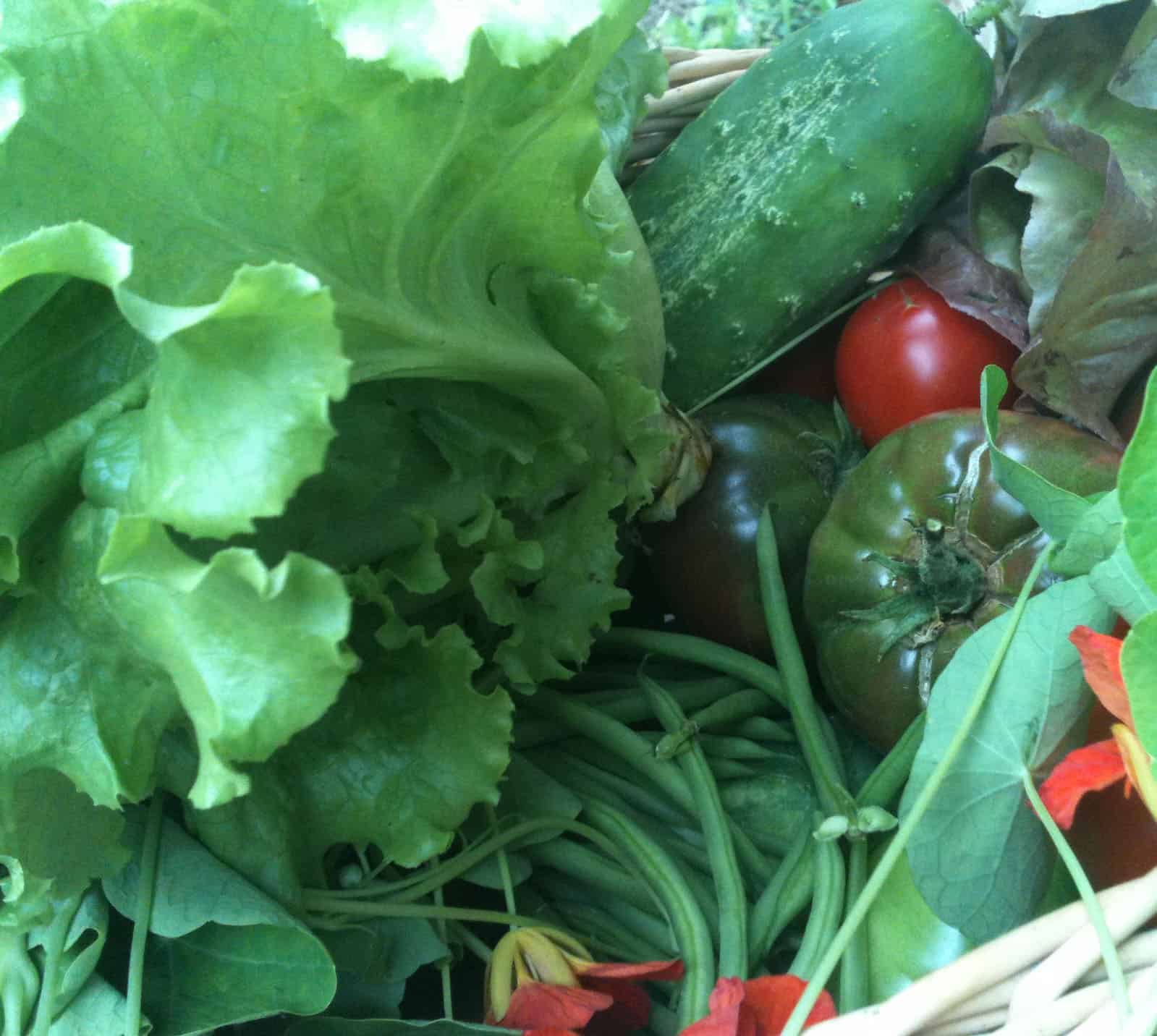 Vermont is enjoying some blessed sunshine after our recent torrential rains and floods, but we’re poised on the cusp between summer and fall. A possible frost is in the forecast for this weekend—although my cayenne peppers haven’t even turned red yet. I’m already raking the first leaves out of my baby arugula. 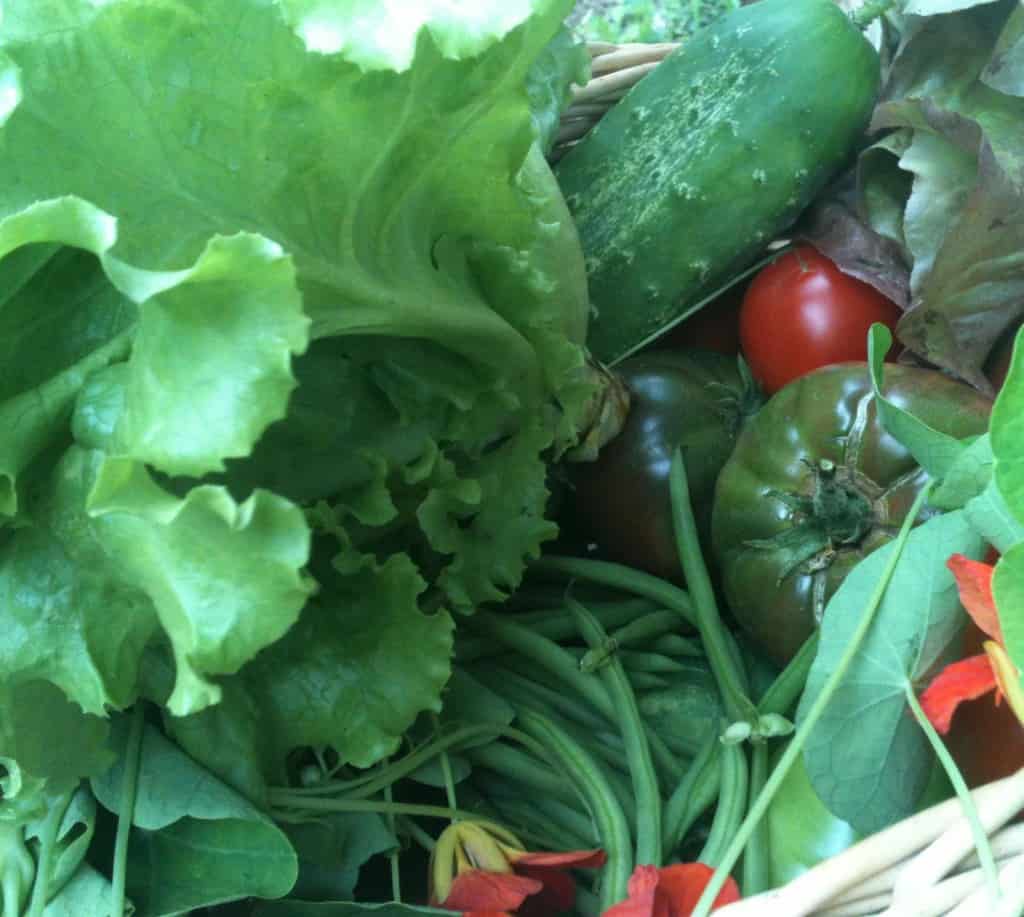 Autumn brings with it a tinge of melancholy as my garden declines, but I am also invigorated by the act of clearing the slate. Formerly, I saved garden-planning for winter evenings by the woodstove, but I have begun to realize that it’s more efficient to combine the task with my fall clean-up. As I pull out dead plants, I mentally re-organize the garden and physically begin to prepare the garden spaces for their next occupants.

I loosely follow a rotation system that removes much of the work of trying to keep track of what should go where. I used to fiddle with pages of complicated and tattered charts kept from one year to the next. Now I follow Barbara Damrosch’s eminently practical and simple advice from The Garden Primer:

1. Divide your garden into four rough quadrants, and assign one family of vegetables to each quadrant, as follows—

The heavy feeders (cabbage family) follow the nitrogen fixers (beans); you never accidentally put the eggplants where tomatoes grew last year; and everything gets a three-year reprieve from being in the same soil twice. As for the miscellaneous crops like shallots or lettuce, just stick them in wherever there’s space—which can often be in between other plants that won’t attain full size until the lettuces are long gone. 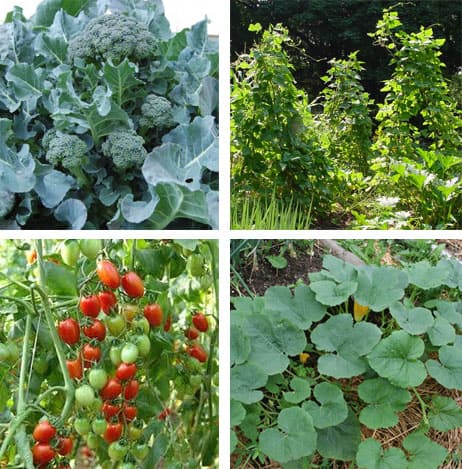 As I clear away each harvested crop, since I know what’s going into that space next year, I can prepare the area accordingly. If I’ll be planting garlic there, I simply scuffle-hoe any weeds, throw some compost on the surface, and leave it until planting time in mid-October.

If the space will be planted with tomatoes or cukes or another last-frost-date crop that won’t go into the ground until next Memorial Day, I like to use a perennial cover crop like winter rye. I’ll have to turn it into the soil late next spring, but at least I won’t be contending with weeds until then. (There are few things more discouraging than watching a neatly cleared garden emerge from under the snow and then be swallowed by chickweed and lambs’ quarters by early May.)

If the space will be planted with early spring crops like peas or spinach, I plant an annual cover crop such as oats, which will reliably winter-kill in my zone. If I harvest a crop in very late fall, like broccoli or kale, I usually just cover the area with leaves. In my rotation, brassicas are followed by peas, so as soon as the ground can be worked in spring, I can rake the leaves back and plant.

Some thoughts about cover crops…

A cover crop is a planting intended to heal and improve the soil in between plantings of food crops. Check this excellent source for some detailed discussion of cover crops.

I used to rely primarily on winter rye, but it takes quite a lot of work to fork it under in the spring. Since I never use a tiller, I employ a garden fork. Usually it takes me two passes, about a week apart, to turn it all in, and then it needs to decompose further before I can plant. I still recommend winter rye for smaller areas and as described above, to keep an area weed-free until early summer, when certain crops go into the ground, but do note that it requires some hard labor.

Leguminous cover crops are fantastic for enriching tired soil. Clover, vetch, and alfalfa add nitrogen and biomass to your soil—and can also give you quite a workout when you need to turn them in. In the early years of my garden, I relied on them heavily to nourish my clay-heavy soil. I have also used clover as a living mulch—planting my tomatoes and broccoli directly into a bed of nitrogen-fixing, weed-smothering white clover.

Now that I use mulch to feed and protect the organisms in my soil, I tend to use more low-maintenance cover crops, like buckwheat and oats. Oats don’t add as many nutrients to the soil as some other cover crops, but they grow quickly, don’t mind acidic soil, and die back over the winter. I chose them for several large areas I want to plant early next spring, so I can save my back for other chores.

Buckwheat is the bees’ knees. It grows up in a flash, looks pretty, and attracts bees by the hundreds. When it’s about to go to seed, I cut it down and let the stalks lie where they fall (the “chop-and-drop” method). They shade the soil, blocking growth of other weeds. If I need to turn them under to plant, they’re not backbreaking to fork in. If I leave them over the winter, they break down nicely and make planting easy in the spring. 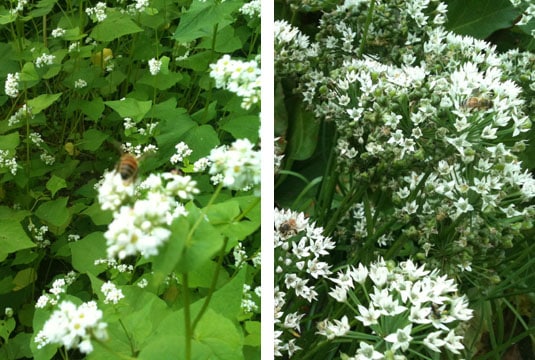 L: Honeybees, which were notably absent from my garden at the beginning of summer, showed up in droves when the buckwheat flowered, so I kept planting more and more of it. R: They love the garlic chives, too! Photos: Jennifer Silver.

My goal for next year is to include more diversity in my cover plantings. Permaculturist Toby Hemenway’s Gaia’s Garden has an outstanding discussion of how to mix and match cover crops to add biomass, fix nitrogen, balance nitrogen with carbon, break up compacted soil, attract pollinators, draw beneficial minerals to the surface, and make certain nutrients more bio-available. The possibilities are galvanizing! I’m starting to get as excited about growing cover crops as I am about growing food.

Here are words not usually heard this time of year: Happy planting!