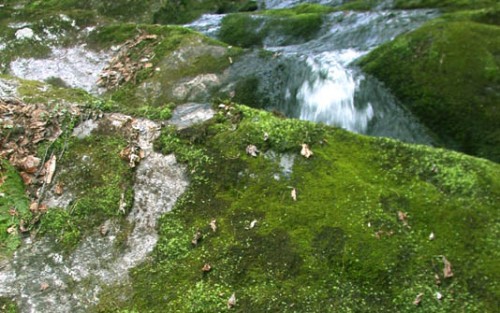 This morning when making a deposit at the compost pile I discovered a truly fantastic scene at the base of an adjacent maple. It was a newly blooming colony of Early Saxifrage (Saxifraga virginiensis), its neatly tufted bases filling the maple trunk’s ridges and holes with such perfection it was almost as if it had been planted by some elfin gardener of the wood. It had in fact been planted by the finest gardener of all, Mother Nature herself, and judging by the looks of those Saxifrage blooms, it was time for my free annual designer’s spring training, compliments of the forest.

It’s easy to become enamored with nature’s garden in spring. When mosses cover rotting logs in an impossibly lush carpet of electric green, spears of false Lily-of-the-valley puncture the brown carpet of the forest floor, fecund red maple buds burst skyward, and crystal clear water cascades in chirping oases of peeper paradise, you know that the waiting is finally over. It’s then that I most like to take long walks through the wilderness to see what’s new and hip in the world of the natural. It’s a great way to get new ideas for garden designs!

It’s not that I’m a copy-cat per se. It’s just that Mother Nature is my muse, and I like to receive inspiration from her offerings. After all, She has an innate eye for all things beautiful and random. She creates gardens that are almost impossible to replicate in that their very existence is almost impossible, though some of us try and try. Here are some of my most sought-after natural garden scenarios. 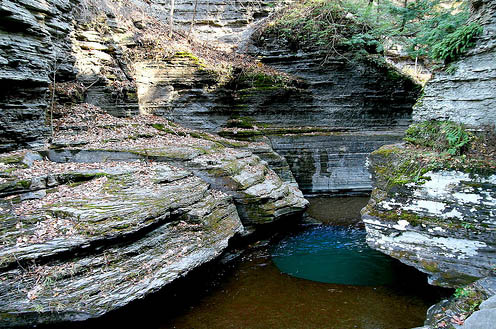 2. The Perfect Pothole
I am in constant awe of the way water can scour perfectly circular “swimming pools” in a limestone stream bed. While studying landscape architecture in Ithaca, New York (known to some for the motto “Ithaca is Gorges,” not due to a misspelling but more in honor of the area’s natural geography), I became enamored with a particular place along the Buttermilk Falls Gorge. There the water ripples across a perfectly flat, browned stone, only to plunge inexplicably into a five foot deep, five foot wide, perfectly round whirlpool of sparkling clear water, and to then return to its shallow passage over smooth flat stone again. Ah, if only I could replicate that in a garden of my own design. We at JMMDS would LOVE that opportunity. Any takers??

3. The Blemish-Free Carpet of Moss
Ok we’ve all tried the buttermilk technique, but getting a really good carpet of moss relies heavily on the culture of the site. You need constant moisture, shade, and a low pH to really make it shine. You also need a really vigorous colony of moss and lack of weed infiltration for perfection. Alas, this all happens so effortlessly in the wild and is the envy of moss gardeners everywhere.

Keep an eye out for Chapter Two: Painting with lichen and other lost arts, the quintessential cascade, and plants growing in cracks