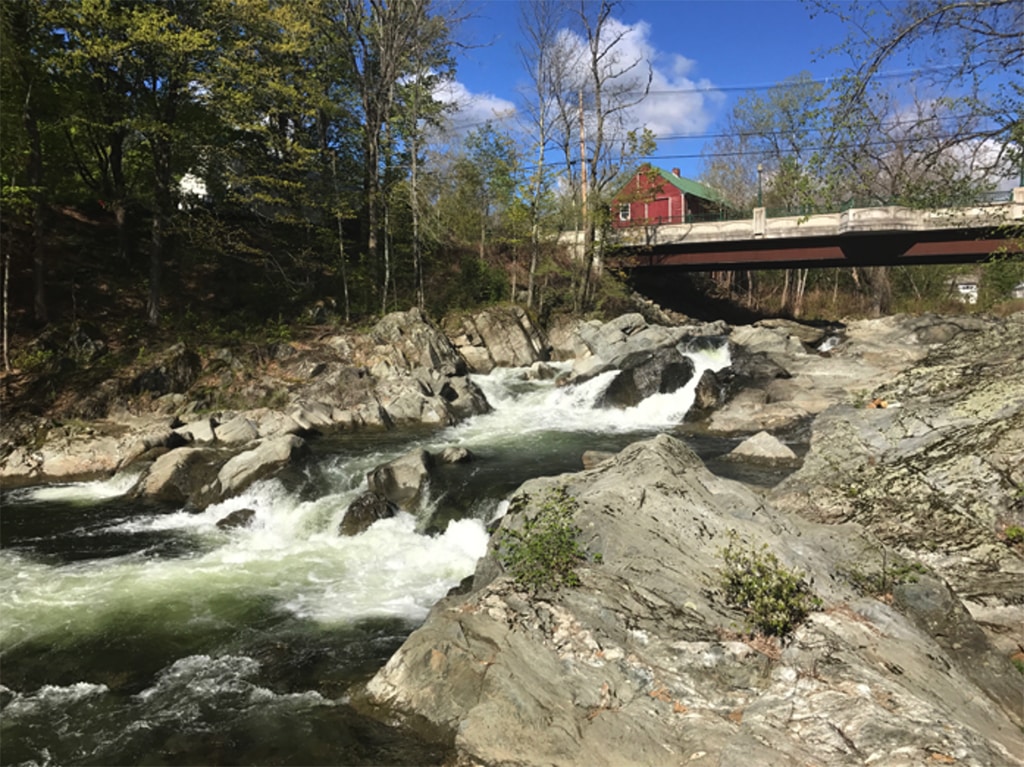 Text by Julie Moir Messervy. Photos except where noted by JMMDS.

Sometimes projects just take a long time to get realized. A case in point is—ironically—one of the JMMDS projects closest to our office, located just up the street from our studio in Saxtons River, VT.

The Saxtons River Park is an old mill site that slopes from Main Street down to the tempestuous falls of the Saxtons River that was used to power woolen, grist, and saw mills throughout the 1800’s and into the 20th century.  Old stone foundations pepper the lower portion of the site; a recently removed 1950s gas station used to sit on Main Street, and the whole is a brownfield for which the village received EPA funding to cap and clean up the one-acre site. 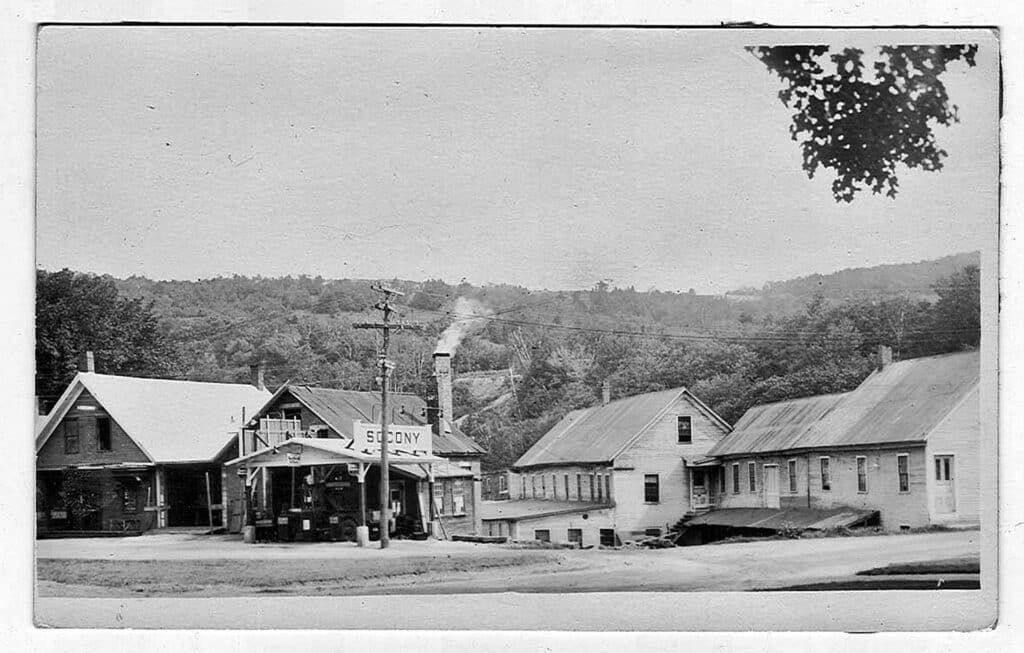 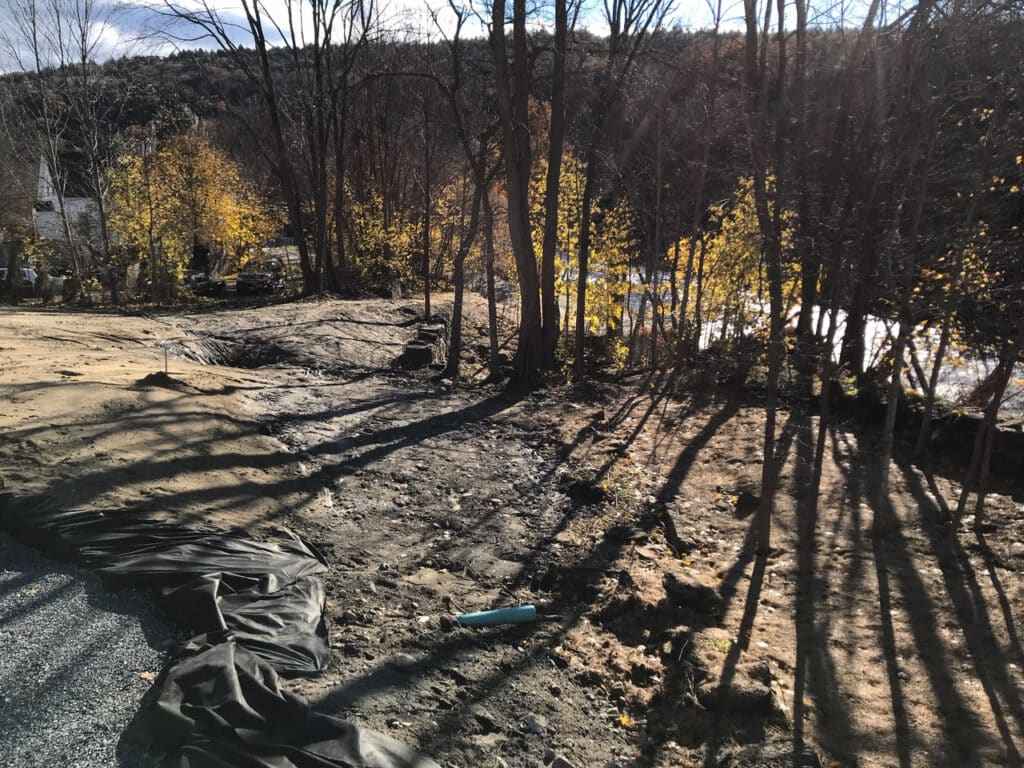 The sloping site above the river, after clearing.

In 2010, JMMDS submitted a proposal to design the park, but another firm won the contract. Then in 2015, we were awarded a revised contract and began our designs in earnest. Property boundary issues stalled the process for another two years, during which time we redesigned the park to accommodate an existing right-of-way. Then, after extensive archaeological studies were completed, we were finally ready to move ahead on construction. 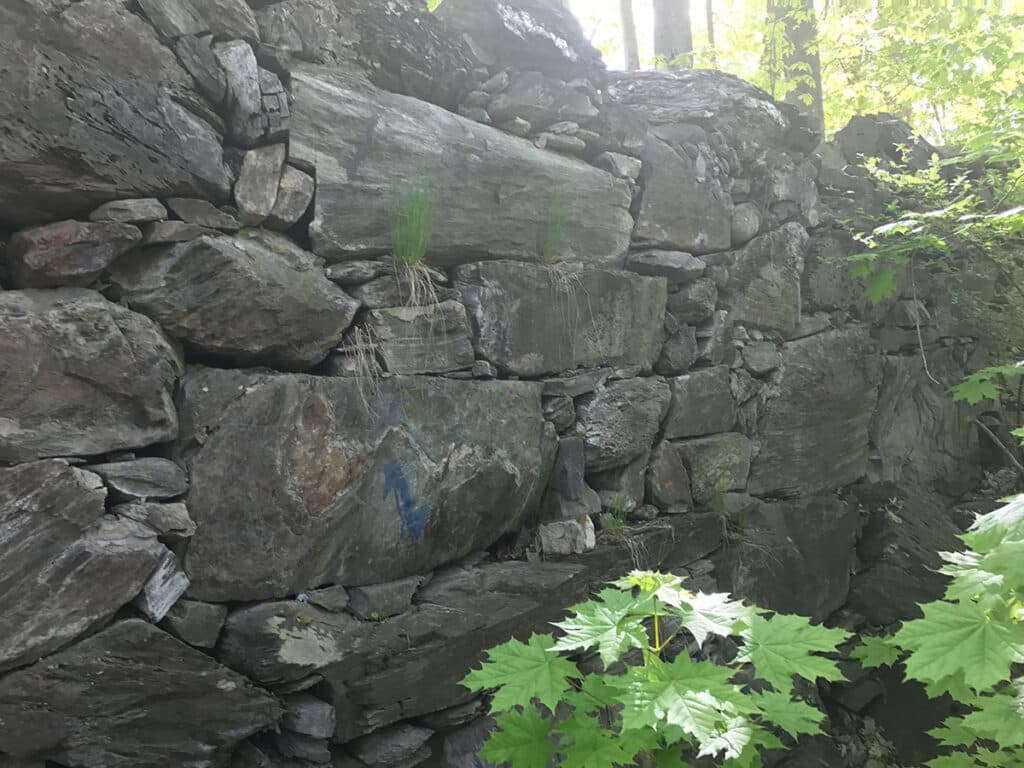 From the start the design challenges were complex: a steep grade, existing rights of way, architectural remnants, and the brownfield contamination. Our goal was to create a joyful community space for gathering and performances (requiring level ground), while also giving people places to rest and contemplate the river and falls. We started with an amphitheater concept that had to shift location to accommodate a right of way through the steepest part of the site. Redesigning and regrading were tricky but opened up a more expansive vantage of the river and a beautiful path through the lower part of the site. 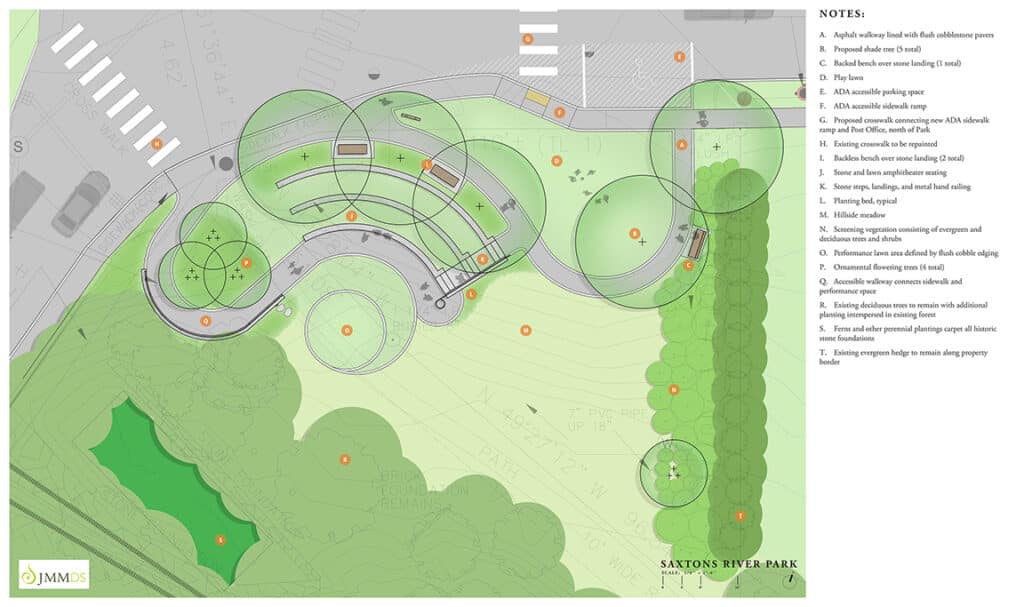 JMMDS’s final plan for the park, with stone seating at the north and walls and river to the south.

Famous for its Fourth of July parade and Christmas-tree lighting celebration, as well as its charming old Inn, the Village Market, and Vermont Academy that overlooks the village from a hill, Saxtons River is also home to Main Street Arts—a vibrant performance and arts organization that was excited about the park to be located across the street. 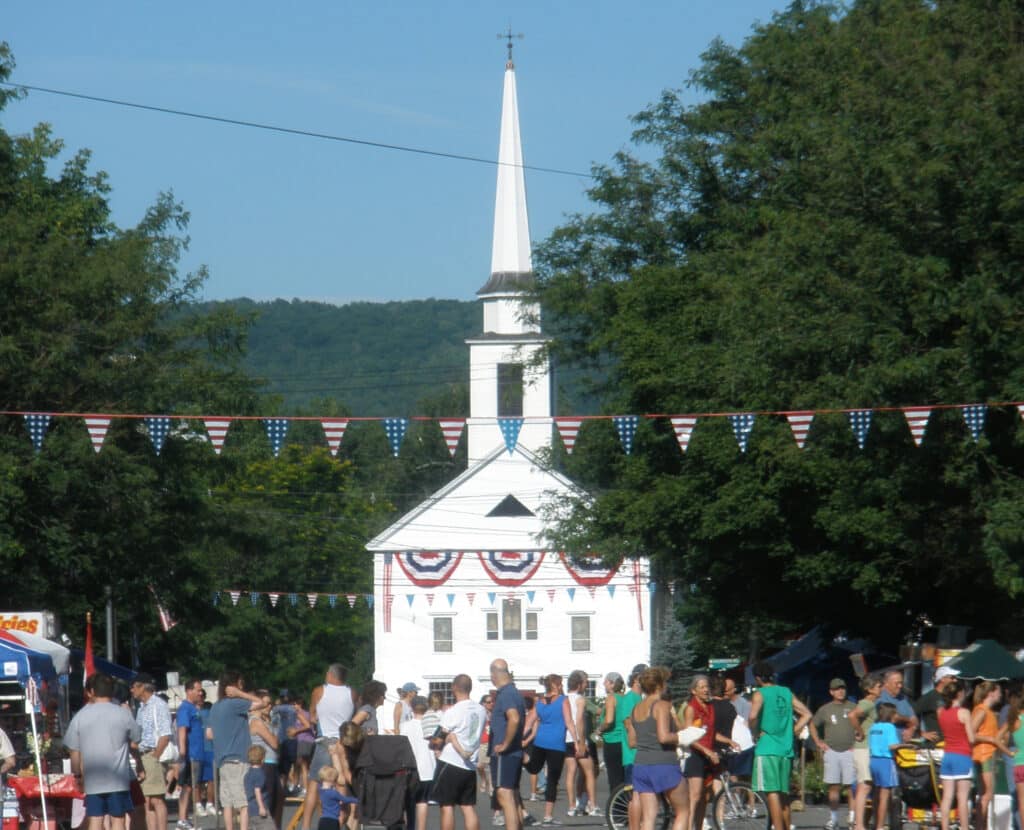 The Fourth of July parade and celebrations bring crowds to the Southern Vermont village. 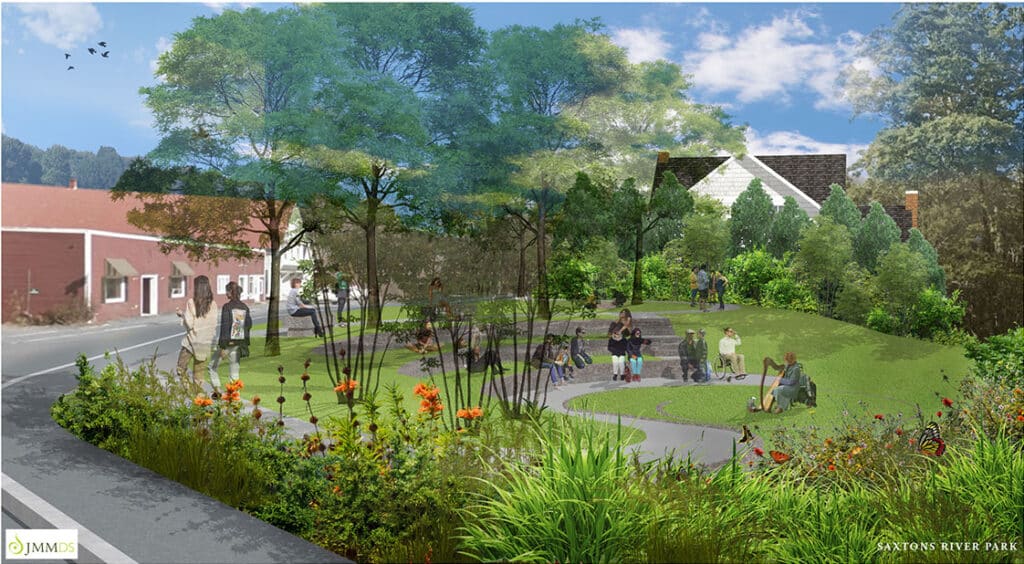 JMMDS’ rendering shows the park, located at the end of Main Street, as a new gathering space for village celebrations and performances.

But how to stay within budget, when the plan calls for the construction of a series of low retaining walls, paths, and steps? We found the answer in a remote field at the town’s storage yard. The town had dismantled an old bridge abutment some years before, and the cut granite pieces were nearly covered up by meadow grasses and brambles. 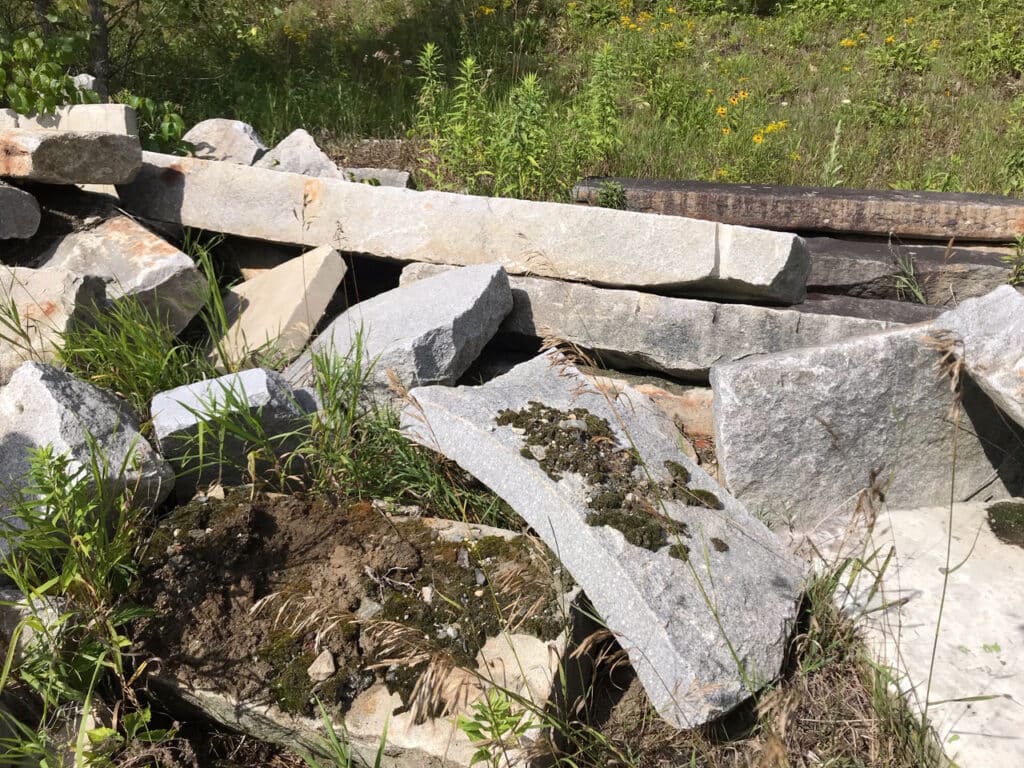 What a thrill to find the remnants of an old bridge abutment just lying there unused!

The town voted to let us have the old abutment stones for a dollar, enabling mason Scott Wunderle of Terrigenous to sort through the stones and organize them according to the walls needed on our plan. 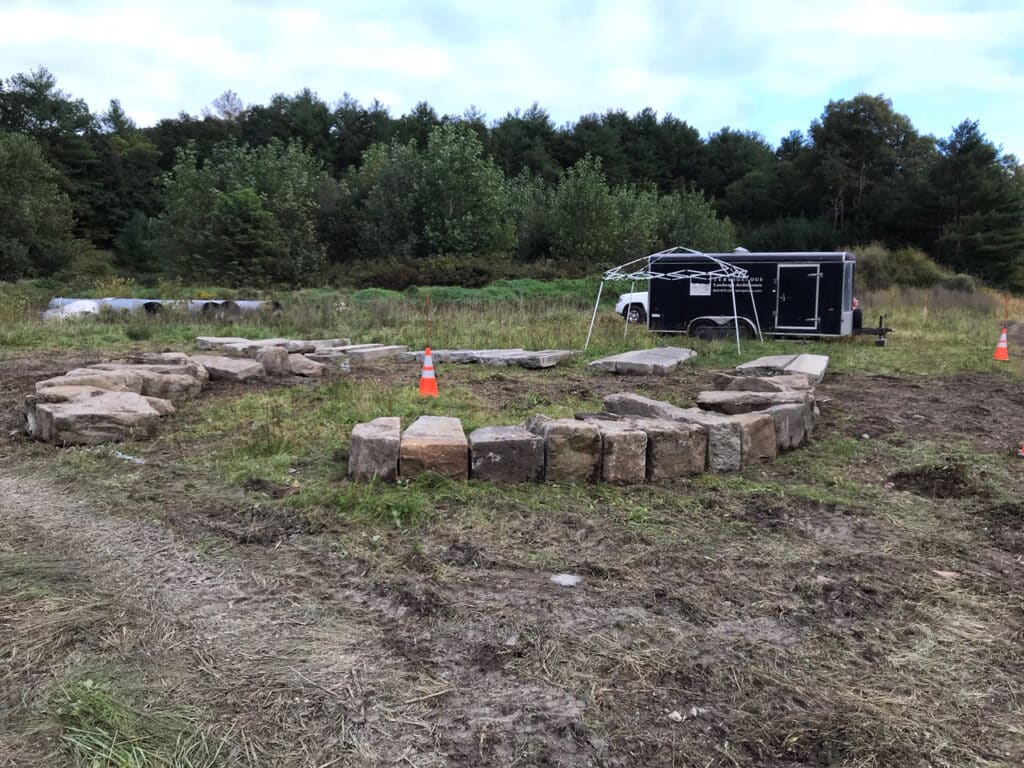 The care taken to lay out the stones beforehand in the field enabled the mason to quickly reassemble them onsite in one of our coldest winters. 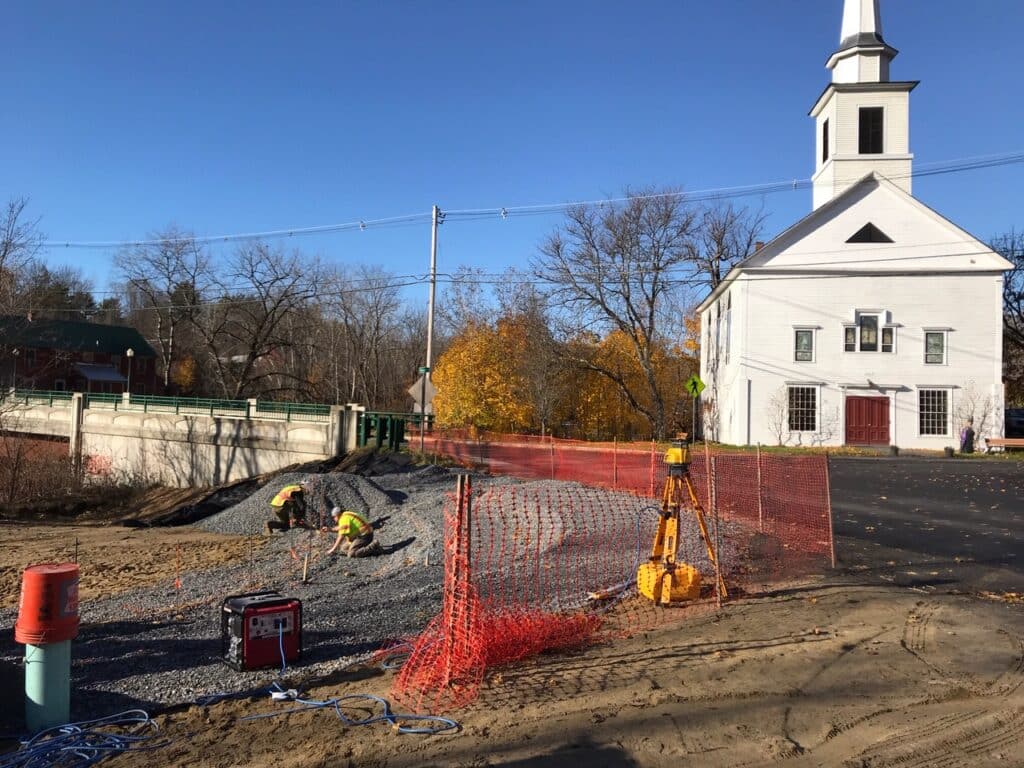 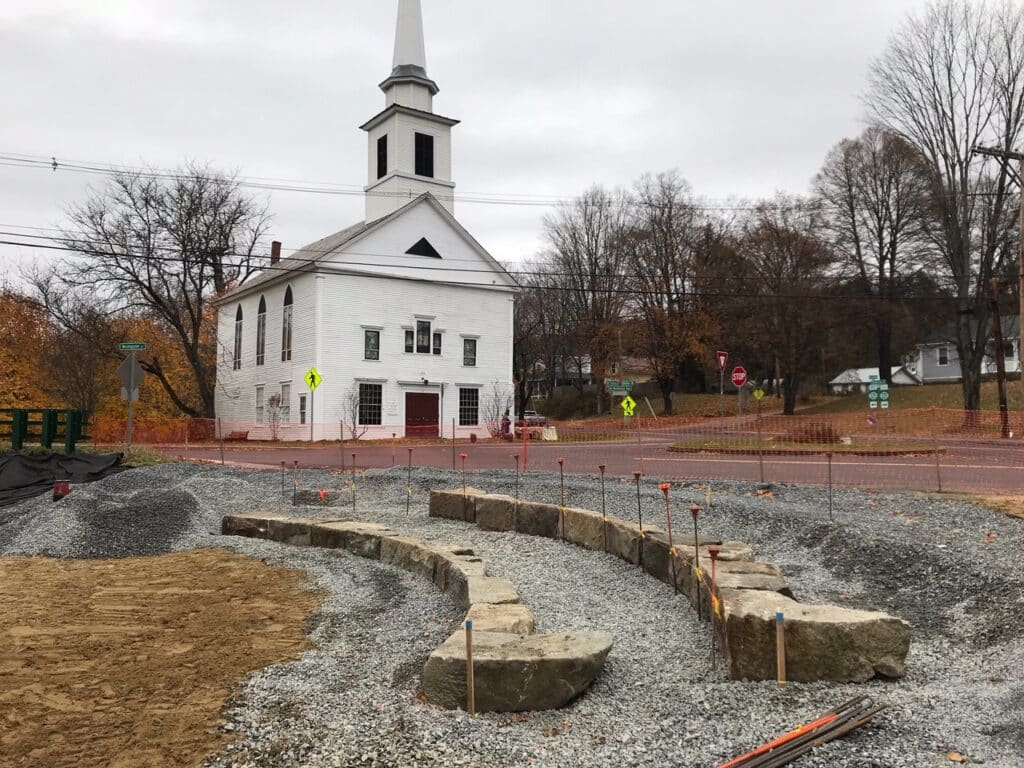 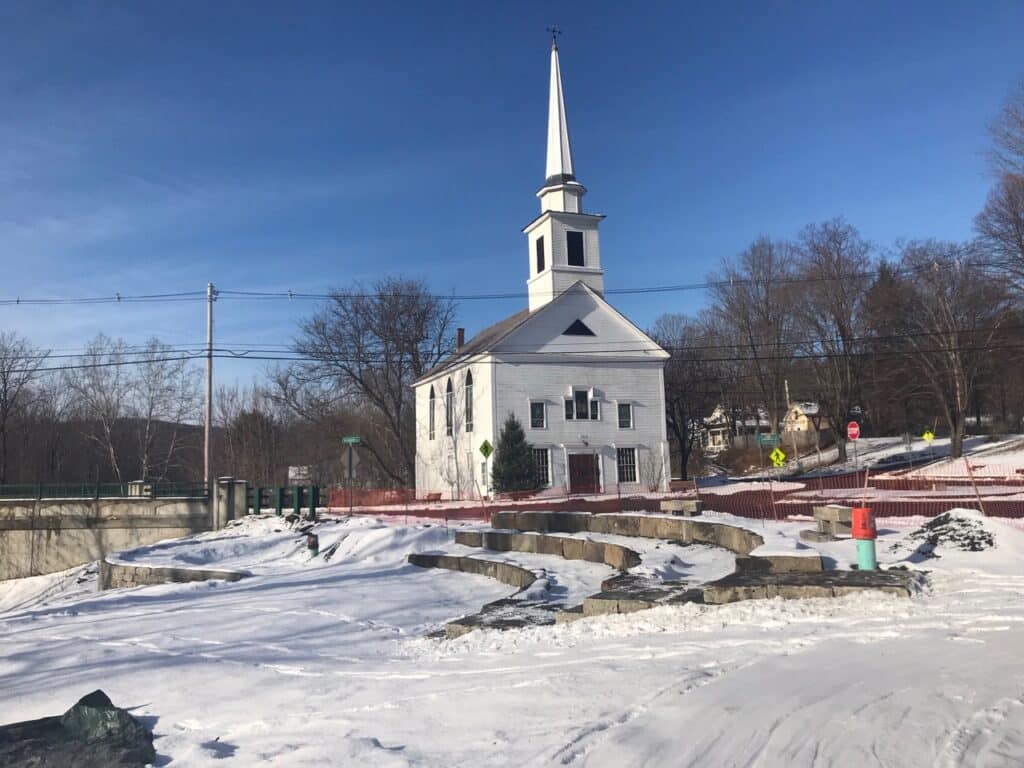 The paths and walls were completed just before winter set in.

Now that it’s almost May, we’ll be finishing the park with final grading, seeding, planting and trees. More soon!

Tasmania, Australia: A Visit to MONA

Tasmania, Australia: A Visit to MONA