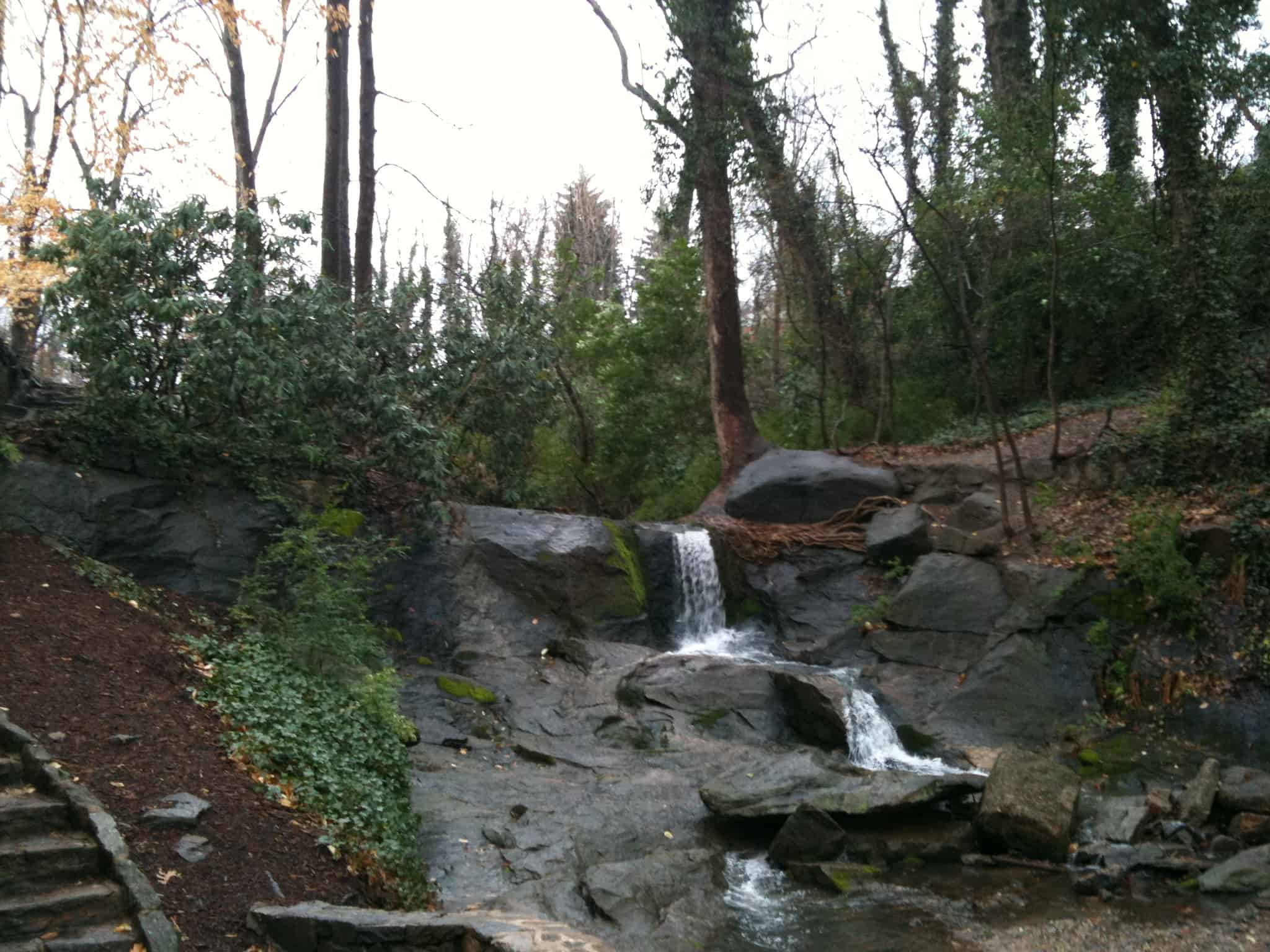 This is Part One of a two-part blog.

What is essential to every great city? A public park, of course. If you have ever been to Greenville, South Carolina, you know the pride its residents take in their downtown, which owes much of its vitality to Falls Park. They love it, and it’s easy to understand why. 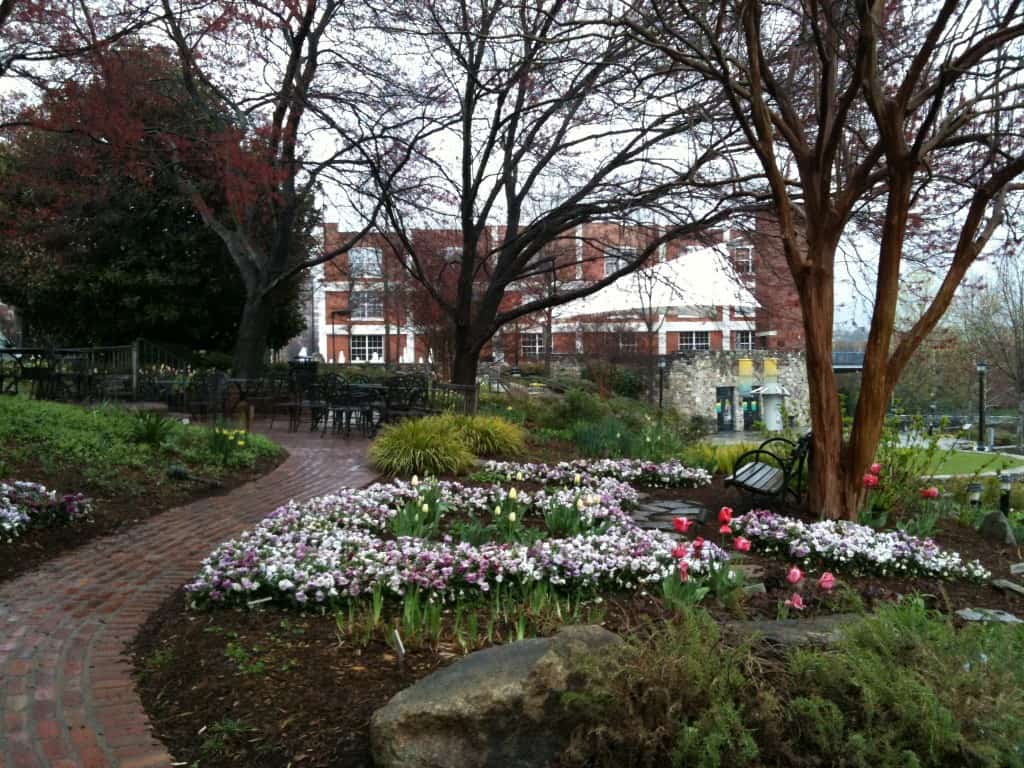 A portion of Falls Park, Falls Cottage, and the Terrace Garden that overlooks the Liberty Bridge.

Last year, US Airways Magazine named Falls Park—in the company of NYC’s High Line, Philadelphia’s Fairmont Park, and Boston Common, among others—as one of the top city parks to visit.

Fallspark.com describes the transformation of the acres along the Reedy River into the beautiful gardens they are today. A vehicular bridge was removed and replaced with a stunning, uniquely engineered pedestrian footbridge. It was a bold move – redirecting traffic and the patterns and habits of city people isn’t a simple task. 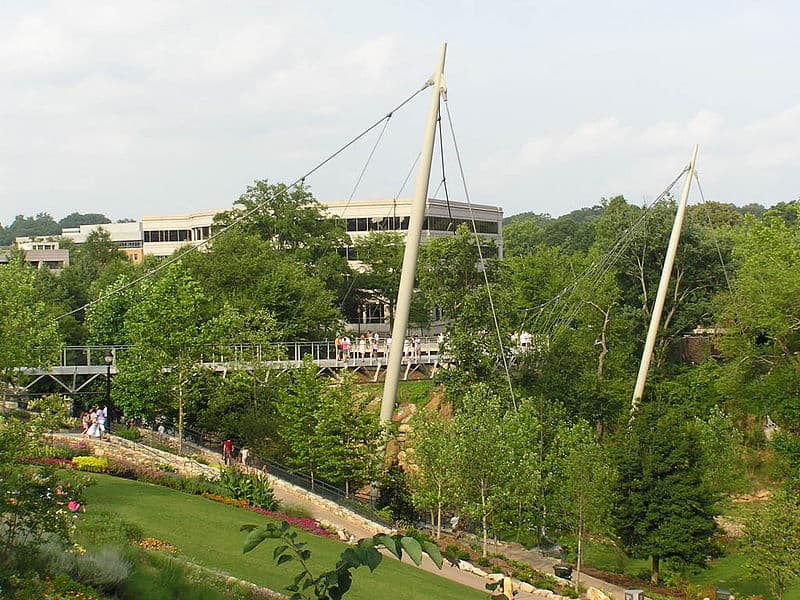 Through the vision and tenacity of the Carolina Foothills Garden Club, Falls Park continues to be highly regarded as a visually stunning centerpiece of Greenville. (fallspark.com website)

Carolina Foothills Garden Club members are an extraordinary group. Julie traveled to Greenville in 2010 to give her Home Outside lecture for the Garden Club’s Virginia Crigler Speaker Series, and club members took her on a tour of Falls Park and asked for her ideas for a 3-acre portion of the park that was not yet designed. After this visit, they invited JMMDS to assist them in transforming this area into a beautiful space that would promote their love of gardening.

They also wanted to commemorate a Garden Club member who was pivotal to the creation of Falls Park: Pedrick Stall Lowrey. Pedrick loved Greenville, gardening, and sharing her love of both. Members of the community supported the idea of a garden that embodies her enthusiasm and dreams.

This piece of land, which we are calling Little Falls Park, has a different character from the main park, which is sunny with places for large gatherings and performances. This site has large shade trees, small footpaths, and a little creek and waterfall that run to the Reedy River, whose waterfalls are the central feature of Falls Park.

The site forms a small ravine.  The creek runs from west to east as the grade falls. Along the top of the slope there is currently a parking lot used by restaurants and shoppers downtown.  A simple footbridge crosses the ravine but sits among thickly grown trees and feels unsafe.  The lower grade has small footpaths, winding stone steps and walls, which are remnants of an old arboretum. The tall canopy of trees keeps this special piece of land cool and the atmosphere quiet.  An old stone Spring House hints at the history of the land.

Some images from our first visit to the site: 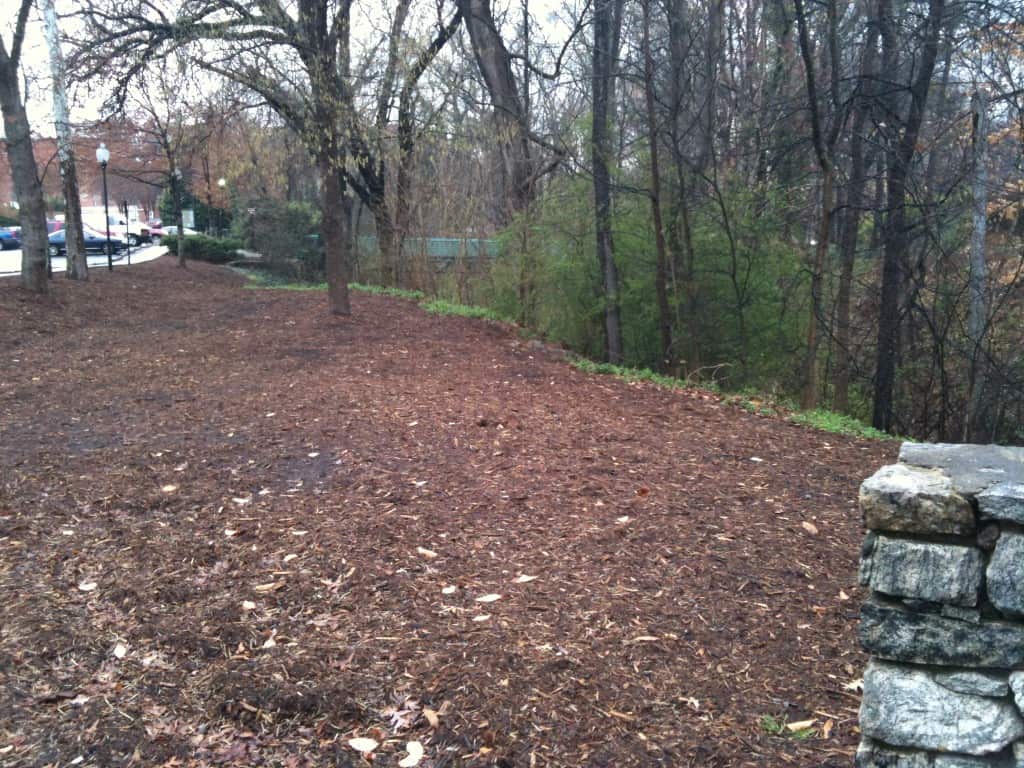 The adjacent parking area and vacant space at the top of our site. 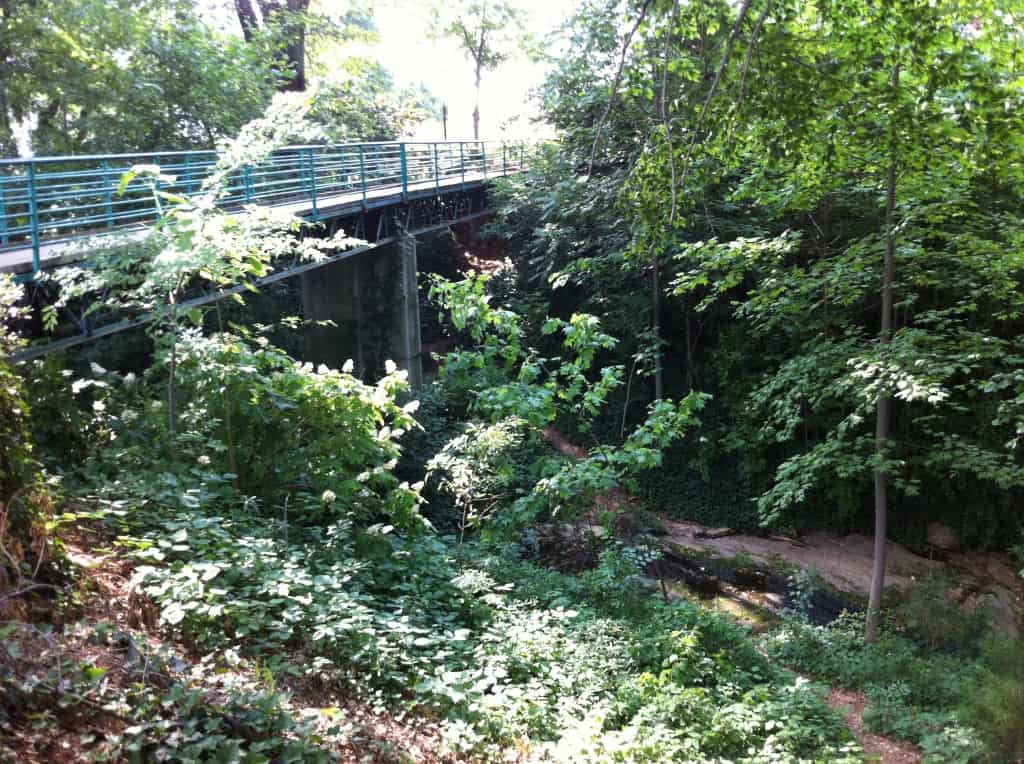 The pedestrian bridge that crosses the ravine doesn’t convey a safe and welcoming impression. 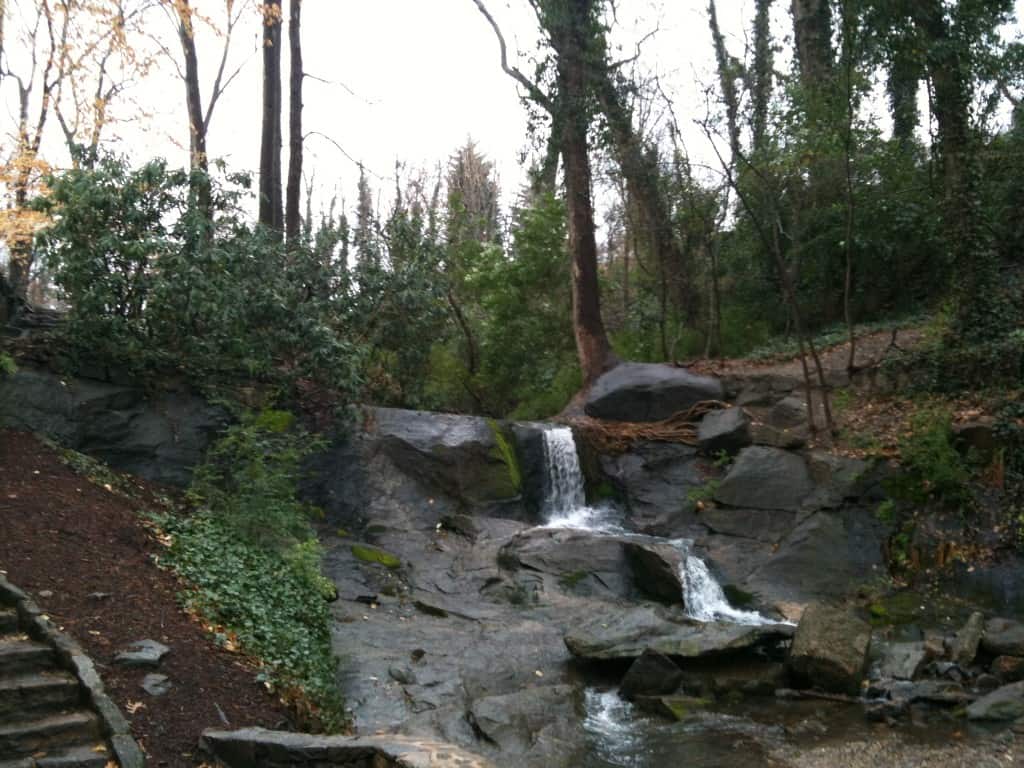 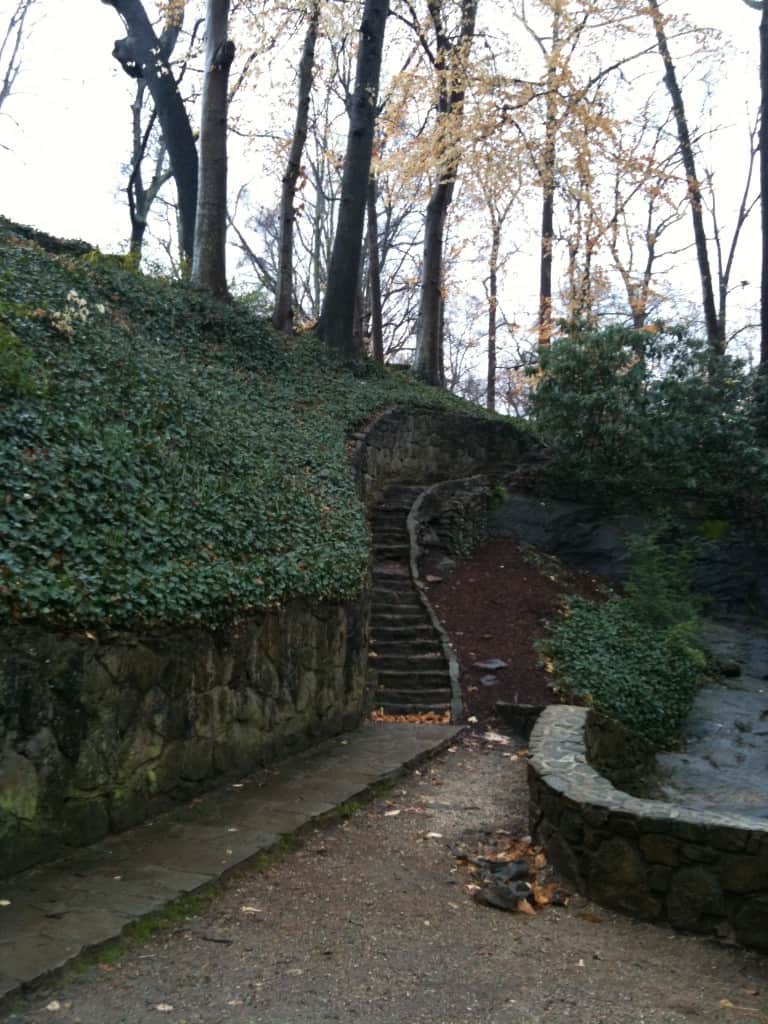 The winding stairs and stone work are remnants of the old arboretum, originally designed by Prof. S. A. Ives of Furman University. 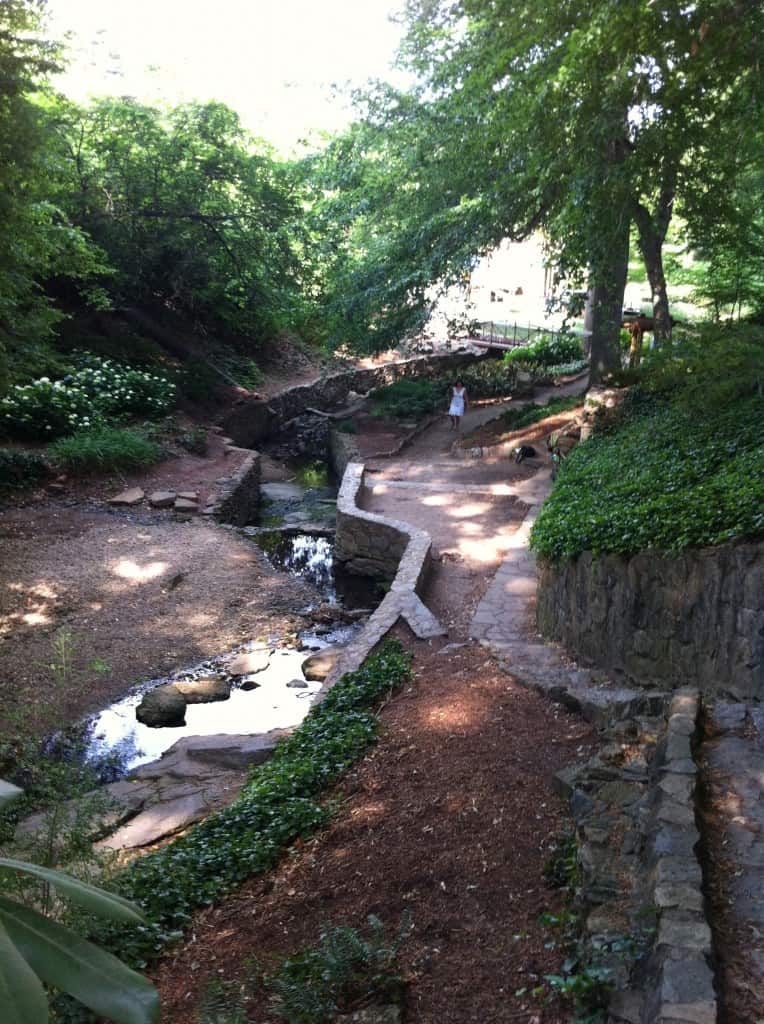 The old Water Garden area is filled with debris from storms. Our site is shady and cool while Falls Park, beyond, is in full sun.

We knew we had to bring to the table many interested parties who care about this piece of land. We wanted the perspective of Carolina Foothills Garden Club, of which there are 40 active members. We also needed the opinions of the City Parks and Recreation staff, since they will be building and maintaining it. In addition, we wanted the thoughts of Pedrick Lowrey’s family members in order to create a garden design that would best honor her memory.

We decided to hold a Visioning Workshop. With 27 people in attendance, the group discussed why it was important to create something on this piece of land. We learned quite a bit about the land and surrounding area, the history of Furman University (which donated six acres of land surrounding the falls to the city), the old arboretum on the property, and the role of the garden club in its creation. We made lists of favorite characteristics of the land and the elements that could—or should—change.

The highlight of the workshop was when we divided and mixed up the entire group, giving each mini-group a plan and asking for their big ideas. Their imaginations flowed. Each group had a wonderful element or idea that the others could support. The big ideas were exciting.

We returned to the studio with many possibilities generated from the Visioning Workshop. These were developed and then presented at another meeting to the entire group, which quickly narrowed down the ideas to a single clear vision.

With the help of the city staff in assessing the health of the existing trees, we have been developing the design further. A local horticulturalist discussed with us his experience in planting and improving the grounds in this area. He also found historical records on the old arboretum and images of the park from the 1930s. 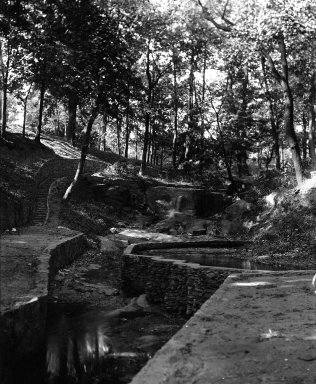 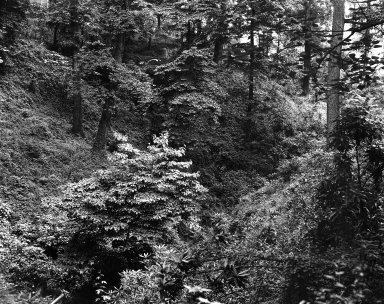 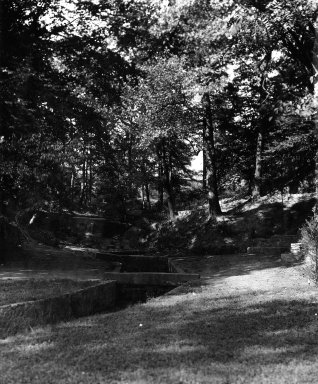 These historical images of the site were found at Furman University.

Look for our next post, Part Two, in which we’ll reveal the Little Falls Park design!

If you just can’t get enough of Greenville, watch this You Tube video.

Editor’s Note: This blog was updated on October 15, 2012, with correct information provided by Carolina Foothills Garden Club. Thank you!

The Roots of My Obsession: Thirty Great Gardeners Reveal Why They Garden

The Roots of My Obsession: Thirty Great Gardeners Reveal Why They Garden