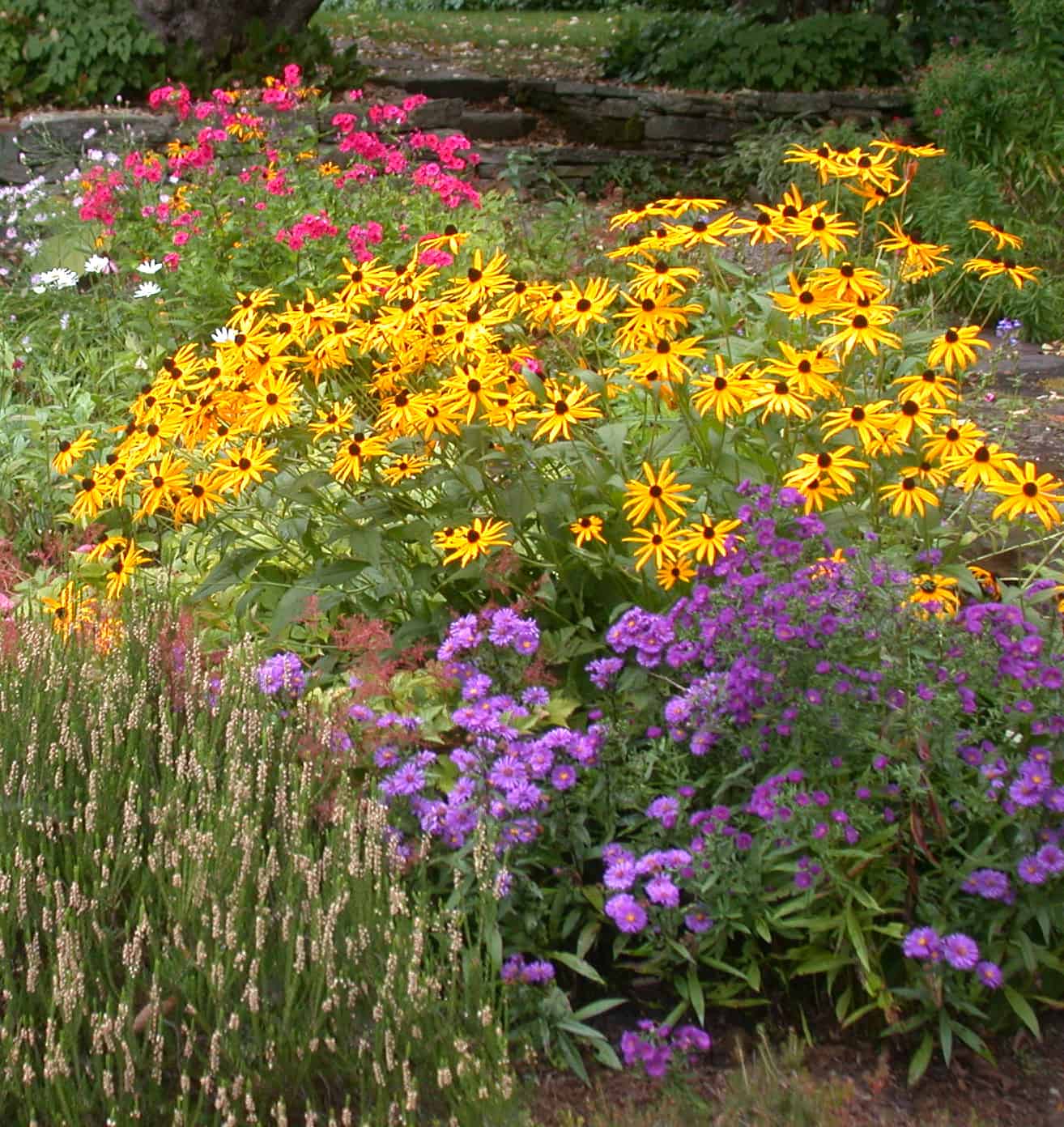 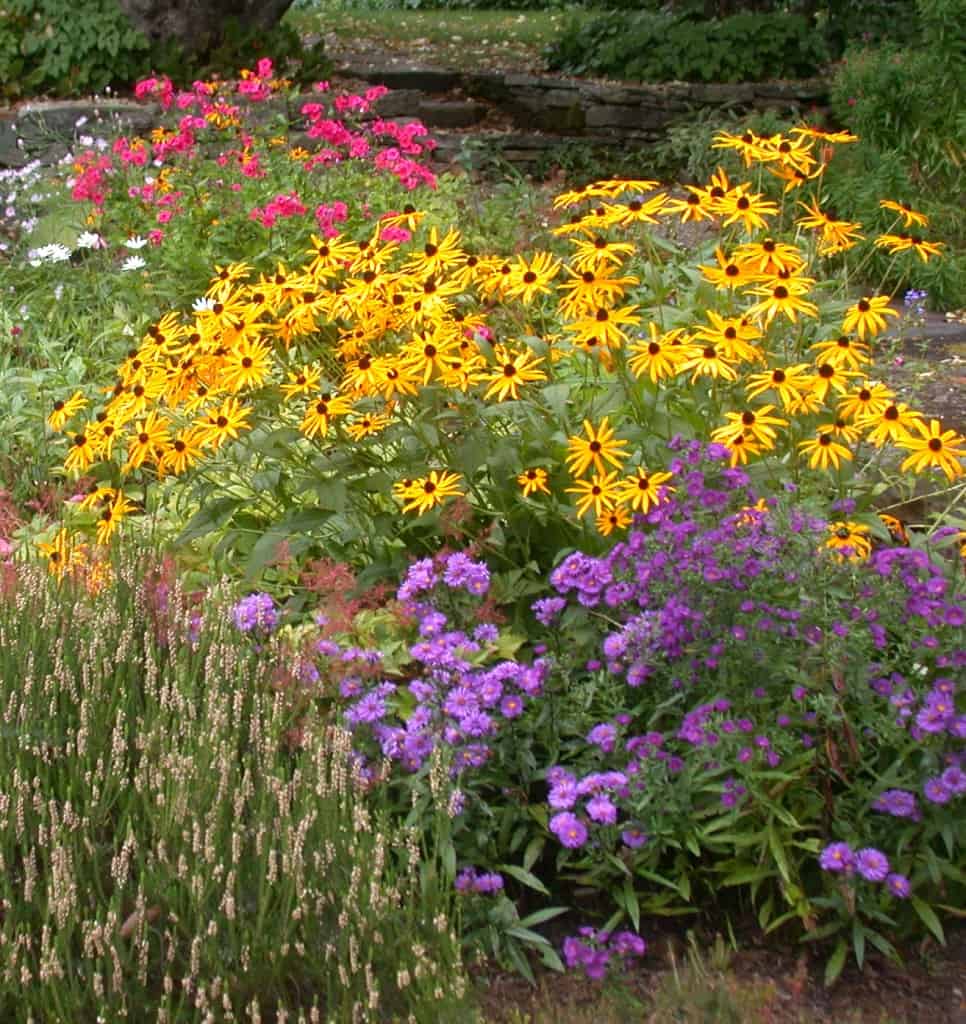 Healthy Rudbeckias, or black-eyed Susans, are a beautiful addition to the perennial border. Photo: Erica Bowman.

Some call it a weed, others think of it as a glorified wildflower, but to many gardeners, black-eyed Susan (Rudbeckia fulgida) is a staple of the late-summer garden.   ‘Goldsturm,’ the most popular cultivar (Rudbeckia fulgida var. sullivantii ‘Goldsturm’), was developed in Germany but has become a North American mainstay, brightening perennial borders and wildflower meadows from July until October.   Rudbeckia‘s large yellow flowers are brilliantly golden, its growth habit vigorous.  With such a reliable reputation, it would be difficult to find a garden center that did not sell it.  But the times, they are a-changin.’

Margery Daughtrey from Cornell University would tell you that ‘Goldsturm’s light is fading.  With a high susceptibility to downy mildew and Septoria leaf spot, its perceived beauty and reliability are on the wane.   A Senior Extension Associate charged with “improving disease management for ornamental crops,” Ms. Daughtrey is currently researching species and cultivars of Rudbeckia for greater disease resistance and hopes to find a suitable replacement.

We consulted her (and other plant pathologists) for advice when a JMMDS client’s ‘Goldsturm’ planting became infested with downy mildew this year.  The Rudbeckia planting had been the centerpiece of our client’s garden: a 700-square-foot phenomenon of brilliant autumn color. To see the bed in its current state of withering, spotted, and faintly flowering Rudbeckia was devastating.

The Rudbeckia plant shown on the left is infested with Septoria leaf spot (photo: Michigan State University); the plant on the right has downy mildew (photo: Purdue Extension). To the untrained eye, the spotting is similar, but downy mildew is distinguishable by the downy white coating on the underside of the leaf.

A plant infested with downy mildew develops dark lesions similar to Septoria rudbeckiae (Septoria leaf spot). Unlike Septoria r., downy mildew affects the flowers of the plant, causing loss, deformity, or reduction of bloom.  Downy mildew causes leaf stunting and chlorotic leaf spotting, and in wet conditions the sporongiophores will be visible as a white downy layer on the undersides of the leaves.  The earlier in the year the infection sets in, the greater the destruction to the plant.  It is certainly not attractive.

Unfortunately for our client, the problem is not an easy one to solve.  Her garden has the three conditions necessary for the pathogen to take hold: 1) a susceptible host – in this case Rudbeckia fulgida ‘Goldsturm’; 2) the presence of a pathogen – in this case Plasmopara halstedii or helianthii (downy mildew of sunflowers); and 3) the right environmental conditions – in this case a cool but damp location with little air movement.

The obvious solution was to remove the susceptible host plant.  Plasmopara halstedii will infest Rudbeckia fulgida ‘Goldsturm,’  Helianthus annuus (annual sunflower),  and other species in those genera.   (Over 100 species in the aster family are affected, especially in the genera of Centaurea, Coreopsis, Heliopsis, Erigeron, Artemesia, Verbena and Xanthium.)  There are many plants, however, that would not be a host to downy mildew.   We recommended the removal of the Rudbeckia and the planting of a replacement species of a different genus, or, at the very least (if the client was unwilling to let go of the Rudbeckia), a change of species or cultivar.  Black-eyed Susan (Rudbeckia fulgida var. fulgida), Deam’s coneflower (Rudbeckia fulgida var. deamii), and sweet coneflower (Rudbeckia subtomentosa) are three plants that have shown less susceptibility to the pathogen.

Removing the pathogen is not as easy.  Plasmopara halstedii is an oomycete that lives in the soil as oospores.  It also lives on the plant tissue. Good sanitation for a Rudbeckia planting is to cut the plant to the ground in the fall and to burn or bury all foliage.  Downy mildew infection becomes systemic, so once the plant is contaminated, it needs to be removed.  As a preventative measure, in the spring/early summer, just before any symptoms begin to show, one could treat plants with an approved fungicide. Rotating fungicides will decrease the speed of development of resistant organisms, but the fungicides are likely to become ineffective within a ten-year period of use. For long term control of downy mildew, the gardener must either remove the host plant or alter the environment to make it less hospitable to the pathogen.

This strain of downy mildew spreads quickly in conditions of high humidity, low temperature, and low air circulation.  Our client’s garden sits at the base of a tall hill with mature hemlocks, ferns, and shaded woodland plants. The substratum is predominantly clay.  Though we haven’t yet conducted a percolation test, the topography, subsoil type, vegetation, and pathogen presence indicate the presence of consistent moisture.  Nearby plantings of Calamagrostis, Epimedium, and Euphorbia are infected by different fungal diseases.  A soil test revealed a pH of 7.0-7.8 in the garden with varying levels of potassium deficiency.

It would be difficult to make changes to the overall environment of this landscape: topography, subsoil, and temperature are conditions that are likely to be constant.  We could check on the subsurface drainage to make sure it is working sufficiently and fix it if it is not. We could also move the Rudbeckia bed away from the Calamagrostis stands to increase air flow.   We could add 12” of soil and create a raised bed, though the oospores might migrate into the new soil.  Fixing the potassium levels by adding the recommended amounts of potash will help bolster the plants’ disease resistance.  This client does NOT use overhead irrigation, but if she did we would have recommended switching to drip irrigation immediately to decrease spore spread by splashing water drops.

In the end the client agreed to take the simple solution and remove the Rudbeckia.  This was not an easy decision for her.  She loves her garden and the Rudbeckia plantings have become part of her identity over the years.   We hope that we can help her find a new plant to fill its void.  That jury is still out.

What is interesting about the problem as a case study is that even the top researchers are not sure about the ultimate answer.  Most nursery crop research is done in greenhouses or at least carefully controlled test crop settings.  Real field studies are rare, and the accumulated data tends to be more of a collection of anecdotes from growers, gardeners, and professionals like the JMMDS staff.  There is still much to be learned. All we can do is keep gardening.