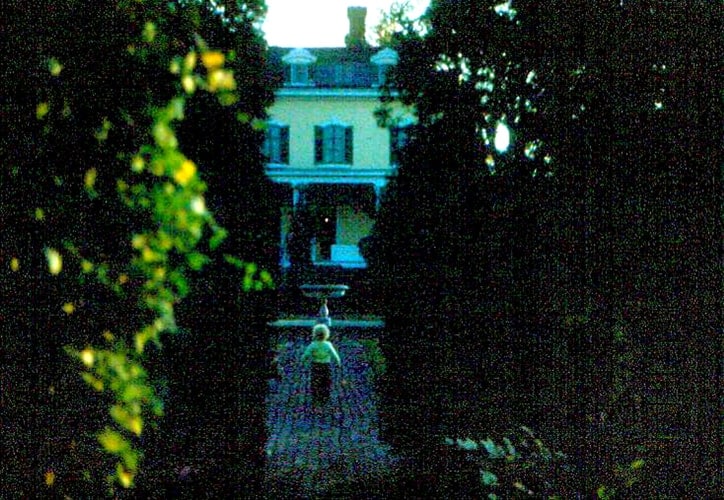 In honor of Halloween, a two-part special blog on ghostly gardens by Erica Bowman, JMMDS. Scroll down for a haunting slideshow!

Memories of a Fairy Tale: The Ghost of Echo Lawn

A lot can happen to a landscape in eighty years.  Fields can become forests.  Farms can become freeways.  Gardens can become ghosts of what they once were.

A few weeks ago JMMDS received a letter from a Father Kilby, describing the heartbreak of losing a beloved garden. Certainly everyone here sympathized (we are all lovers of gardens, after all), but his story had a personal appeal for me.  I too suffer the sorrow of a great garden lost.

It should be said that the garden I lost was never mine to begin with. When I learned that my mother had once lived in a castle of sorts (a mansion, really) with great, cantilevered wooden stairs, mansard roof, a widow’s walk, and curvaceous balustrades that bordered an expansive stone patio and looked down over a sunken garden, it was a bit like discovering that my mother had once been a princess.  Who else if not princesses played croquet in sunken gardens or swam in fountains?  I developed a sort of vicarious thrill imagining her experiences there.  I never had the honor of personally entering this garden, however—not even once. It has always been as untouchable as a fairy-tale place.  Even for my family it was as fleeting as a dream.

My grandfather Beal, a notoriously bad driver, had a terrific accident that left him crippled, with one leg 3” shorter than the other.  The winding staircases at Echo Lawn became an insurmountable impediment, and the family was forced to subdivide the property and build a new, one-story house that he could navigate.  In 1957 Echo Lawn was sold to Frederick Warmer, and the Beals surrendered the key to the garden forever.

Throughout my own childhood, my grandparents remained in that ’50’s modern house on the property adjacent to Echo Lawn.  Sometimes during visits my curiosity got the better of me, and I found myself sneaking down to peer over the walls. What remained by this point was a mere fraction of the splendor of the original garden—which did nothing to diminish my intrigue.  So much of it lived in my mind, anyway.

What I do know about the garden comes largely from the few remaining photographs, a beautiful painting by my Great Uncle Gifford Beal, and detailed descriptions from my grandmother Mary Beal’s lips.  If I were to piece it together I would describe it like this:

The patio looked down upon an expansive walled garden with vine-covered walls, a large circular central fountain, and perfect geometries of green lawn divided by straight brick walkways.  The western walls of the garden, abutting the patio and parallel to the house, were nearly 12’ tall.  One entered the garden via a split slate stone staircase that circled around a small, semi-circular goldfish pool with a lion’s head fountain. At the center of the garden was a circular fountain where the Beal family would swim, and during their stay it was rimmed with myrtle and ferns in a most Picturesque manner. If one continued straight (around the fountain) s/he would exit via the eastern gate, which was flanked by two large columns topped by globular finials. A gravel path shaded by a great cedar pergola continued for 50 yards or so before it reached the third fountain, known as the “frog pond” during the Beal era.

A small stream marked the boundary between the Echo Lawn and the Delano estate of Algonac.  Directly across the stream was a statue of Pan in a bed of myrtle and forget-me-nots. At one point a great wooden bridge was erected down-stream of the Pan statue, connecting the two estates.  A great party celebrated this union with flying flags and good cheer.

The path from the sunken garden to the “frog pond” was flanked to the south by the lawn’s end and a great oak tree at its apex.  To the north hemlocks rimmed was a semi-circular garden of hybrid tea roses.  A path led through a cherry tree allée and towards a one-acre vegetable garden beyond.

South of the circular fountain was a short set of stairs to a Concord grape arbor that extended nearly half a mile to the pond. Eventually the Japanese beetles proved too great an enemy to the grape crop and the vines were removed.

There was a four-acre lawn filled with oak trees and a great Southern magnolia (M. grandiflora).  A copper beech once stood at the house’s front entrance but has since been removed. A hedgerow of alternating white dogwood and redbud were planted for interesting bloom combinations.  The lawns were interplanted with walking thyme for a lovely, aromatic effect.

In 2009, the property was added to the National Register of Historic Places.  According to the NRHP documentation (and that of the new owner’s on their Stonegate Farm website), the property was first developed by a man named George A. Elliot, and the main house was built by Frank Gerard in the Second Empire style (familiarly seen in many buildings along Paris’s Champs-Elyssées).   It was said to be heavily influenced by local (and famed) designers, Andrew Jackson Downing and Calvert Vaux.   (These two also worked together to design the landscapes of the White House and Smithsonian Museum, and Vaux later went on to work with Frederick Law Olmstead on Central Park.)   AJ Downing also designed the reconstructed home of Sara Delano, Franklin Delano Roosevelt’s mother at the abutting estate named Algonac (as previously mentioned). According to Mary Beal, the Delanos were “good neighbors” and kept their trees topped so that Echo Lawn should continue to have a view of the Hudson River.

The gardens were designed by brothers Gifford and Reynolds Beal (my great uncles) and installed by owner Thaddeus Beal (my great grandfather) in the early 1900’s. They had spent a period of time spent researching formal gardens in Italy prior to the design and took pains with the long axial views, symmetry, walls, and fountain-work that were typical of Italianate estate gardens of the Renaissance era.  This was despite the Picturesque aesthetic of the larger property’s layout and architecture.  Notably they employed Andrew Jackson Downing’s concept of the “disappearing vista.”

It has now been over 55 years since the Beal family left Echo Lawn.  My grandfather has since died, and my grandmother has moved away from Balmville entirely, but the magic of this garden has never left me.  Over the years I have developed an even deeper curiosity about the garden’s origination and development. I have become a landscape architect myself, and my intrigue is now not only romantic, but intellectual.  I am still stirred by the romantic Gifford Beal painting which depicts the gardens during a summer party with flags flying and flowers blooming, but I am equally intrigued by the garden’s form and function.

“A garden exists not only as a part of your backyard landscape, but as a site that resides in your imagination.” – Julie Moir Messervy, The Inward Garden

My grandmother says wistfully, “You can never go back,” and keeping to her word, she never has. I should probably just relax and let Echo Lawn reside in my mind as my own inward garden. That place in my imagination is where it belongs.

Echo Lawn is located in the small Hudson Valley town of Balmville, New York.  The estate is currently under private ownership.