Designing a Garden on the Spot at Lakeside Chautauqua

I recently spent a few very pleasurable days at Lakeside Chautauqua on the shores of Lake Erie in northwest Ohio. For nearly 150 years, this historic one-square-mile village has been home to charming cottages that house families who partake in a wide range of spiritual, educational, cultural, and recreational activities throughout the summer. Not since childhood summers at our family’s “camp” on Galway Lake, NY, have I been around families enjoying old-fashioned, simple pleasures like shuffleboard, volleyball, bike-riding, watching the sun go down, and reading on deep shady porches.

On the morning of my first day, I gave my Designer’s Way lecture to a large and enthusiastic group. That afternoon, in the blazing heat, together with Loretta Wilken, Lakeside Chautauqua’s Master Gardener, I ran a workshop with at least 60 people who all collaborated in designing a new garden for Lakeside. (Above: A cacophony of vibrant colors awaited the workshop participants.) 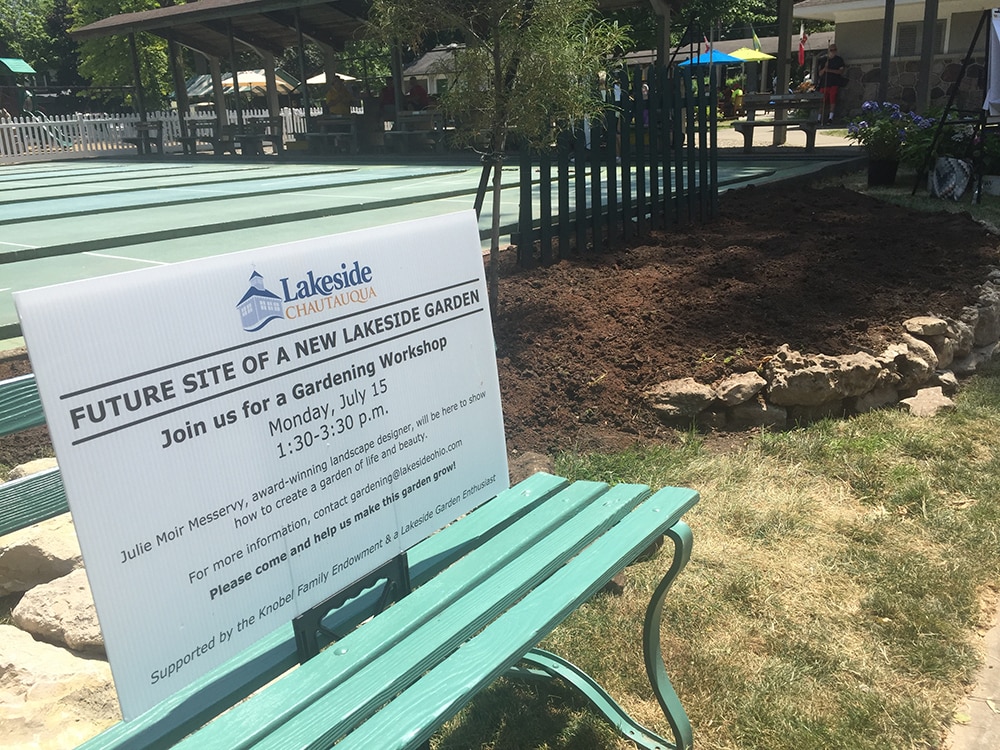 The site of a new garden at Lakeside, right in front of the shuffleboard courts.

I started by having the group examine our Actual Site—the existing conditions of this large planting bed in front of the shuffleboard courts. We added stones to finish the low retaining walls around the beds, then we removed the green fence and decided to keep the ornamental buckthorn tree that had already been planted there. We changed the shape of the bed to create a more dynamic balance by turning it into a paisley shape. We then discussed everyone’s Ideal Site—taking votes on who wanted symmetry and who wanted asymmetry; who wanted lots of color and who wanted mainly green; who wanted to see the courts and who wanted to hide them.

We talked about what the organizing strategy or Big Idea should be. Many felt it should relate to the courts; others thought it could be a pollinator or bird garden; still others thought more abstractly, imagining a theme of wind blowing off Lake Erie or the moon reflecting on its waters. We took another vote and decided on a Shuffleboard Court theme.

One person suggested that we try to use shuffleboard sticks, known as cues, to create fencing at the back of the bed. “Let’s mock it up and see,” I said. Once we did, using people as posts, we saw how it could be done when the right materials became available. 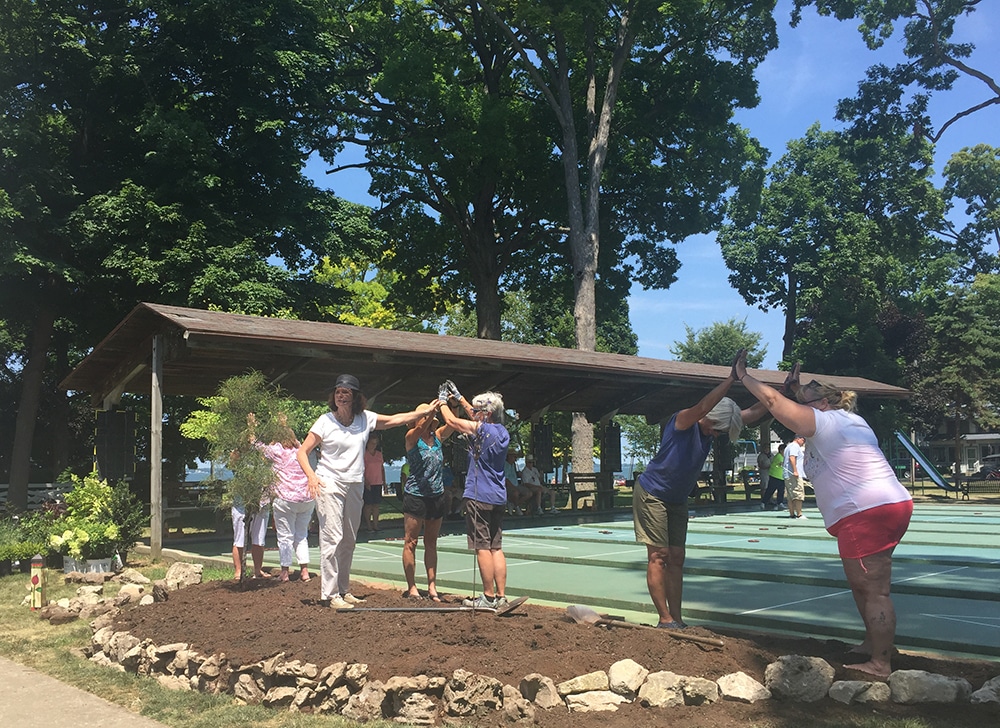 People standing in for shuffleboard cues which could form an enclosure at the back of the garden bed.

Then it was time to place the plants. Loretta and her staff, including Nick and Carol, brought the plants over, and the group suggested where each one should be placed. Small trees and tall shrubs went in first, followed by middle-sized shrubs, grasses, and evergreens, creating a harmonious balance of color, height, and texture.

The group wished to place some additional stones in the garden, which gave us an opportunity to discuss and implement some stone-setting principles. 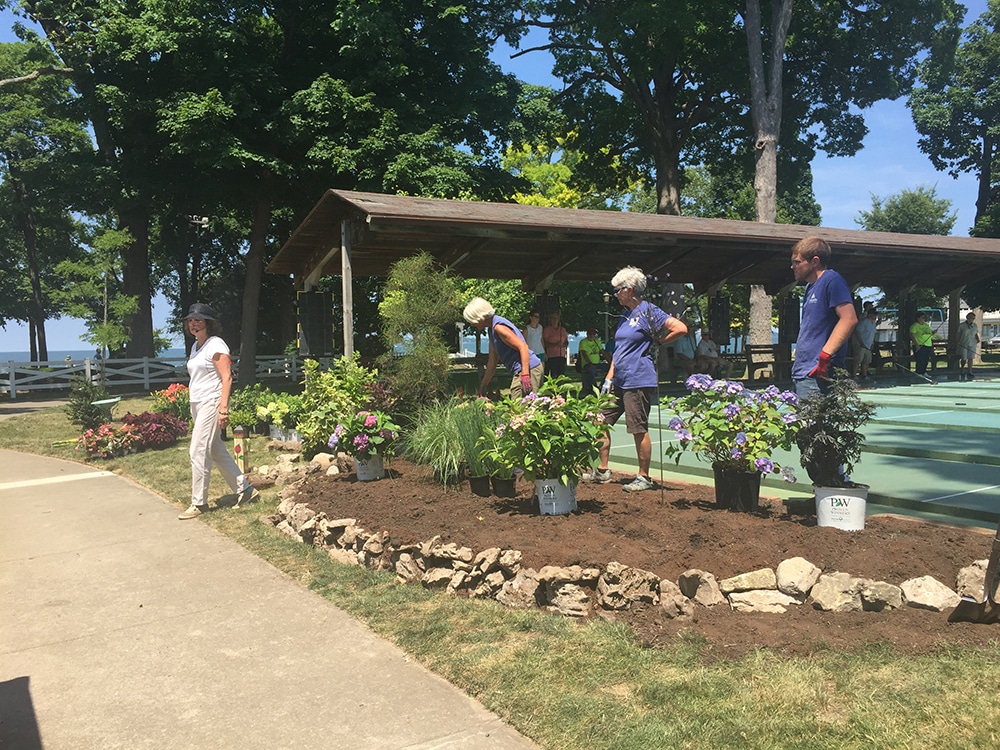 Lakeside gardening staff move plants around according to the participants’ suggestions.

After 90 sweltering minutes, the group had—all together—created a beautiful garden that was then planted and enjoyed by the entire community. The next morning, I gave my Home Outside lecture, explaining the very process and principles that we followed in the workshop.

I look forward to doing this kind of designing on the spot again in the future! 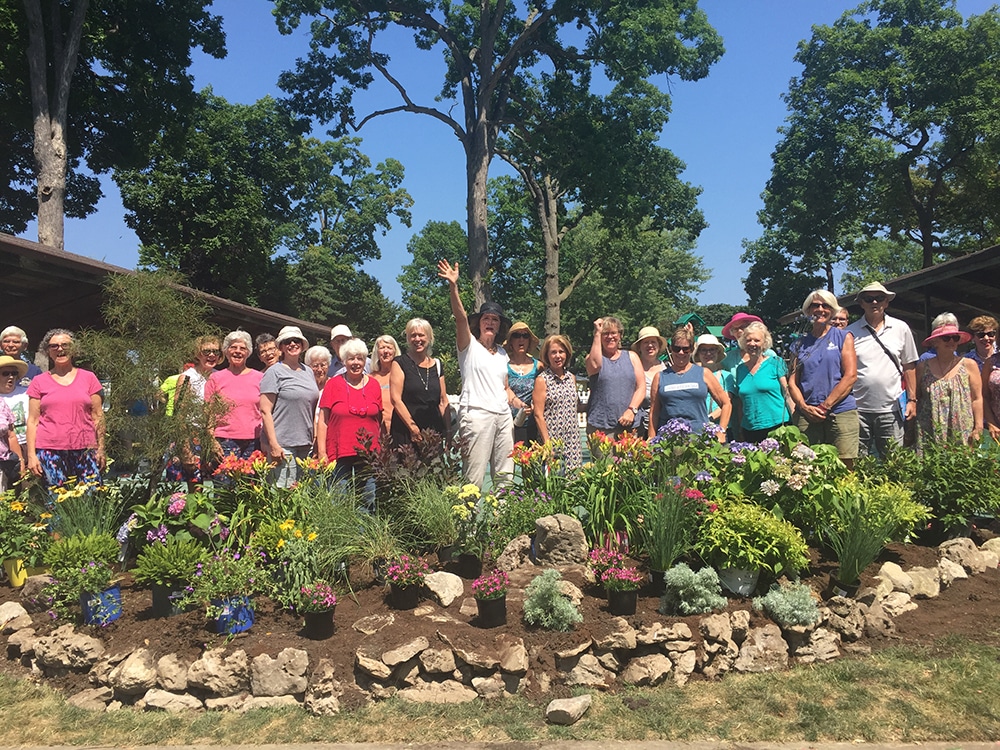 The proud designers of the Shuffleboard Garden at Lakeside Chautauqua.