The Power of Presence

Sometimes it takes a pandemic to change entrenched habits of mind.  Anyone who knows me has heard me talk—for at least a decade—about slowing down, ceasing to micro-manage, spending more time in my garden, being present enough to smell the roses….But despite my best efforts, last year was my busiest ever.  I traveled to Boston at least once every week to attend one event after another at MIT’s Venture Mentor Service and at Mass Challenge for Home Outside, and for client meetings regarding the Rose Kennedy Greenway’s Parcel 18 and the Isabella Stewart Gardner Museum, as well as untold other pitch sessions, workshops, and time spent with my two new baby granddaughters and their parents.

And then came the virus and everything just stopped right in its tracks.  My daughter and son-in-law and their 22-month old, Emi, arrived to sequester with us in Vermont and suddenly my priorities—and my sense of what my job should be—shifted.  No longer could I think strategically and long-term about raising money, creating channel partnerships, developing new apps.  No, instead I needed to save our companies and make sure my team and I could survive and pay our mortgages long enough to get through to whatever was to come.  So I spent time contacting our clients, checking in with creditors, applying for grants and PPP loans, going to seminars to help guide us through the crisis and checking in with my staff to make sure they felt supported rather than fearful.

And yet, the irony was that those first few weeks were also, in their own way, heavenly.  Perhaps thanks to the stresses around me, I slept hard, ate well, zoomed with the best of them, and babysat Emi for two hours a day. She single-handedly brought me from my future-orientation to having—at long last—the presence of mind that I had been seeking for so many years.

For a toddler demands your full attention, every minute you’re with them.  First thing, she’d wake up and see me in the kitchen and say, “Gaga, (my grandmother name borrowed from my own great grandmother), Emi, bees!”  Bees meant that we had to climb up three flights of stairs to my attic workroom under the eaves where an infestation of ladybugs lived.  My job was to gather these “bees” and bring them all the way back down the stairs to the porch door where, with Emi attached to my hip, we’d throw them out the door and watch them fly away into the cold Vermont spring morning.  Next, she’d say, “Elmo?” knowing that I was the pushover of the family who would, if she repeated her demands hard enough, put on a half an hour of Sesame Street or what she called “Oink,” her name for Charlotte’s Web. Instead, I’d  try to divert her into eating some yogurt and fruit with me while watching the turkeys roam our fields in search of bugs.  Other routines included playing bird calls from our audible birdbook, trying on all my costume jewelry, knocking down block castles, or reading the Wizard of Oz in bed. 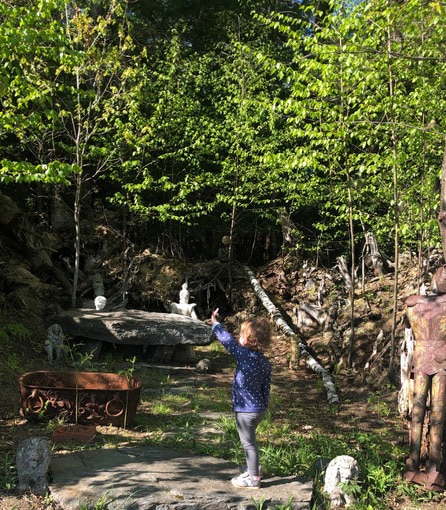 And we spent many hours outside, despite the raw, windy weather that we continued to have until recently. Emi and I would walk down to the Stumpery to visit the concrete animal sculptures, ride on the golfcart with Steve (known now and forever more as “Gucky” (morphing from Grampy to Grumpy to Gumpy to Gucky, probably because he bakes cookies) to see the newts in the swimming pond or, in the late afternoon, to check out the beavers in the beaver pond. Each event turned into a treasured ritual that delights our little granddaughter and keeps me grounded in the here and now.  I’ve learned to leave my cell phone behind and return to my little girl self—the one who plays with baby dolls and stuffed animals, who makes roads and towers and knocks them down, or looks in close detail at bugs, birds, and picture books once more. Now I, too, am a toddler, curious and furious and completely absorbed by my surroundings and the people who love me.

Steve’s been asking me for years to “step away from my (overactive) brain!” How lucky I am to be given this moment, away from fearful interactions, in a beautiful natural realm at the end of a dirt road, with only my darling granddaughter and her parents and Gucky (and a bit of work!) to divert my attention from curiosity in the world around me.  Emi and I are in a bubble for sure, but what a glorious bubble that I will miss whenever all this goes back—if it ever can—to “normal!” 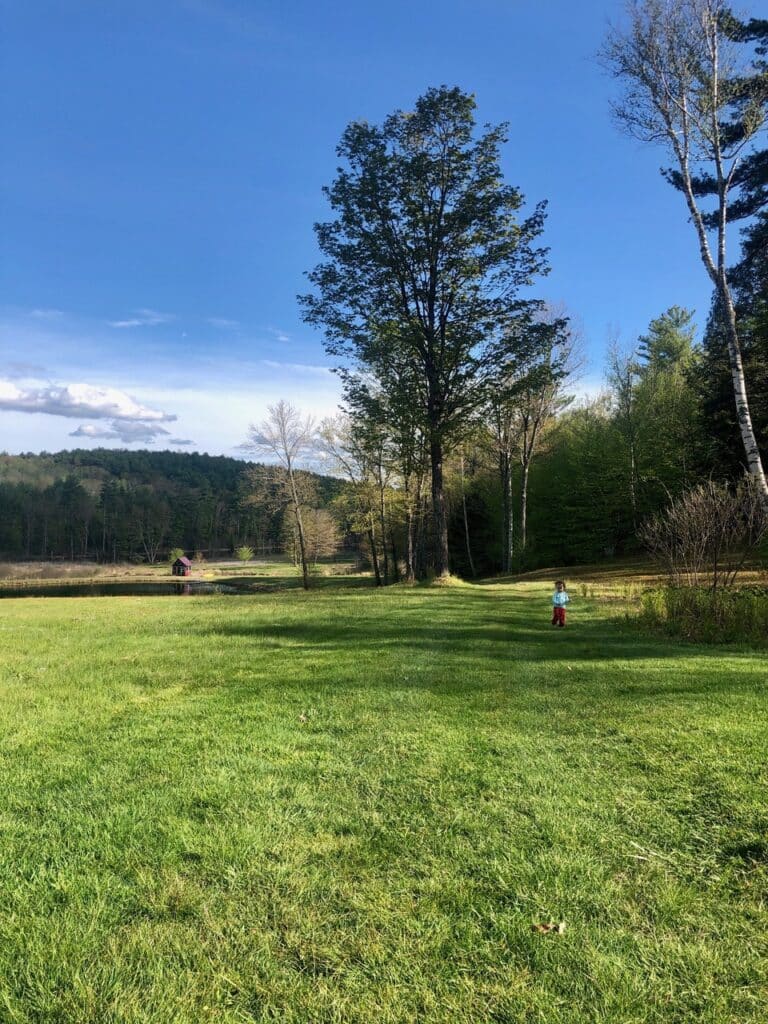 Note from JMMDS: If you’re looking for something lovely and uplifting to listen to this weekend, please check out this Radio Open Source episode, in which host Christopher Lydon interviews Yo-Yo Ma about his project to play Bach’s Cello Suites all over the world. Around the 35:30 mark of this fascinating conversation, they discuss the creation of the Toronto Music Garden, which Julie collaborated with Yo-Yo Ma to design in 1995.

In Memory of Stan Kozak, the Gardner Museum’s Devoted Gardener

In Memory of Stan Kozak, the Gardner Museum’s Devoted Gardener