Leave No Ground Uncovered: ‘Tis Better to Mulch Than to Weed

Jump on the mulch wagon to keep the weeds at bay and get one step closer to the holy grail of “No-Maintenance” gardening! Here’s how to get started:

All gardeners know the benefits of mulch. It conserves moisture, prevents erosion, enriches the soil as it decomposes, acts as a weed barrier, and gives an attractive, uniform appearance to our beds and borders. Not all mulches are created equal, however—in fact, they are wonderfully different, contributing a range of benefits. Using one type of mulch in exclusion of all others is to invite imbalance (not a good condition for any living thing) and to miss out on the valuable soil nutrients other mulches can provide.

Confessions of a Mulching Convert:
I became a devotee of sheet mulching (also known as lasagna gardening) in my vegetable garden, where there is no exposed soil to be seen. Every square inch is covered in layers of mulch, gently crumbling into chocolaty loam. When I first converted to this method, I started in late winter and covered the weedy, neglected beds with layers of water-logged newspaper held down by rocks. You can also use cardboard, paper grocery bags, or unlined paper feed sacks. I followed with alternating layers of straw, old chicken bedding (still only partially composted after two years!), shredded leaves, and grass clippings, with sprinklings of fireplace ashes to counter the acidity and small amounts of unscreened finished compost as an inoculant.

The following year, my vegetables thrived as never before, and over the course of the season, as I added more organic material, my heavy clay soil grew richer and fluffier all the time. I had feared that putting down layers of straw and leaves might offer too many enticing nesting places for veggie-munching insects, but I didn’t have any unusual problems with bad bugs. Nor did I have any signs of plant diseases (although I have to admit that I didn’t even risk the heartbreak of growing tomatoes this year…not after 2009, the Summer of Watery Tomato Death).

But here’s the clincher: This year I spent less than five hours—all spring, summer, and fall—weeding our 900-square-foot vegetable garden. Basically, I pulled a dandelion or two a couple times a week while using the time I gained to laze in a hammock. Okay, I made that up; we don’t have a hammock, and I have no idea where all the rescued time went. But I do know that my chronic gardening-season back pain was absent this year, and my partner did not once find me sitting up in bed, weeding in my sleep as I was once wont to do.

L: New mulch; R: Older mulch that has been applied and had time to break down. Photos: Jennifer Silver.

Making the Mulch:
Emboldened by this success, I began using a variant of sheet mulching in my perennial beds. Formerly, I would open the gardening season with a ceremonial dumping of locally produced, naturally dark brown bark mulch and proceed to spread it on any newly-planted flowerbeds and wherever the mulch had thoroughly broken down in older beds. It was very attractive, but I stopped using it for two reasons. First, my perennials were not multiplying and flourishing as they used to. I believe it was because of the tying-up of nitrogen that can occur during the two-year-long decomposition process of shredded bark or wood chips. (Please note that I don’t believe that this is always the case with these mulches; I have worked in gardens where such mulches were used with no ill effects whatsoever. I think it happened in my soil because other adverse conditions exacerbated, rather than ameliorated, the imbalance. My gardening site, like many, is rife with adverse conditions.) The second reason is that my sheet-mulching ingredients were even more local—they are produced on-site, requiring no transportation but my wheelbarrow—and they are free. I eliminated straw and chicken bedding as aesthetically unappealing but deployed chopped leaves, grass clippings, and other organic matter (described in more detail below) to great effect.

The comfrey plant makes an excellent addition to your compost. Photo: Jennifer Silver.

The shredded leaves of the comfrey plant make an exceptionally good mulch additive. Comfrey has long tap roots that pull nutrients from deep underground. When you slash and shred the leaves and strew them around your garden, you are bringing buried treasure to the surface. This year I planted some comfrey in an unused corner of the yard, where it thrived, even during our brutal high-90s heat wave, and grew huge, handsome, dark green leaves. I left it alone to grow strong roots, but next year I will cut it to the ground several times and spread those leaves around. You can also steep the leaves in a bucket of water for a foul-smelling but nutrient-rich fertilizer tea.

(A note about comfrey: it will take over the world if you let it! I planted the Bocking 14 variety, which is sterile, to cut down on one method of reproduction, but the roots are still vigorous spreaders. Plant it far from anything you care about. If you ever need to get rid of a comfrey patch, don’t bother digging; any teeny-tiny root bit will spawn evil clones. Just throw a tarp, a layer of newspapers, or a giant leaf-pile on top of it, and leave it to die a long, slow death.)

Leguminous plant matter also makes excellent mulch. These plants include beans and peas, as well as the ornamental baptisias and lespedezas (and anyone who grows these knows that they can provide a lot of biomass). Leguminous plants not only host nitrogen-fixing microorganisms in nodules on their roots while they are growing, thereby enriching the soil; they also provide extra nutrients when their cuttings are added to compost or mulch.

What not to mulch:
There are some plants so notoriously disease-prone that, even if they look perfectly healthy, I dispose of their clippings far from the garden and compost pile. These include peonies, phlox, tomatoes, raspberries and other brambles, and roses. This may be an unnecessary precaution, but I figure, why take chances? There are plenty of other mulch ingredients.

Lessons Learned:
Permaculture teaches us that Nature doesn’t make mistakes and that we would do well to imitate her. In the wild, no one tidies up around plants; they stand in the debris of their own fallen leaves and their neighbors.’ One particularly effective way to mimic nature in the cultivated perennial bed is to employ the technique of composting in place. When I deadhead flowers throughout the summer or cut back my perennials periodically to encourage bushy growth, I snip flowers, stems, and leaves into smallish pieces and let them fall to join the rest of the mulch around the plant. It takes me a few extra minutes, and for a couple days it looks as if someone forgot to tidy up, but the small pieces break down quickly in the summer heat, and soon the mulch looks just as before—but there’s more of it. It saves me some extra trips to and from the compost pile as well.

I also suspect that the benefits of composting in place go beyond mere added organic matter. It seems commonsensical that a disease-free plant must naturally thrive in the biochemical conditions of its own decaying matter—that is, that chemical compounds released in the decomposition process are beneficial to that particular plant. 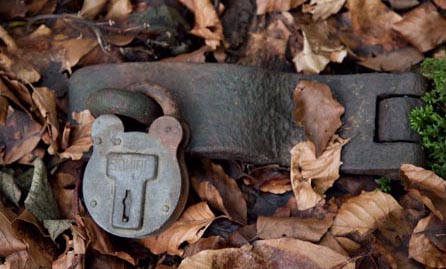 If you’re thinking this all sounds fairly scientific and reasonable so far, let me admit that I have since taken my mulching to the next level. I decided that I would not weed. Except for scuffle-hoeing my dirt paths, I would not spend the summer slavishly pulling weeds out of my perennial garden. When I noticed weed seedlings in my flowerbeds, I immediately dumped more shredded leaves on top of them. Few weeds survived to poke their heads through, and if they did, they were laughably easy to pull out of that deep, loose mulch. If there were particularly tough weeds, or if they had gone beyond the seedling stage (say, to the Little-Shop-of-Horrors stage), I put down a few layers of wet newspaper right over the weeds and then piled my mulch on top. Done.

It is true that sheet mulching and composting in place, as I have described them, will not kill weed seeds as a properly heated-up compost pile will do. I don’t find that it matters. My perennial beds must be full of weed seeds—the ones that arrive there naturally, as well as the ones I accidentally mow and deposit with my shredded leaves and grass clippings. They don’t germinate because they don’t have the right conditions for it. Pulling weeds turns up soil and exposes weed seeds to the sunlight, which rings their little alarm clocks. My weed seeds are sleeping under layers of mulch that will not be touched or turned. Shhhh. Let them sleep.

Anna’s Annuals (and Perennials!): Saving the Seeds of Summer

Anna’s Annuals (and Perennials!): Saving the Seeds of Summer